The great king of the ocean. Having been air-dried, it makes for a fine weapon as well as emergency sustenance.

Luxurious Sea-Lord is a 4-Star claymore obtainable from the Moonlight Merriment event.

As the nights deepen, the pulsing of its gills translates as such:

"Well now, I was undoubtedly dead when I left the sea."
"My heart ceased to beat, the whites of my eyes showed, I gave off a rank stench—"
"I mean, for a fish, this had to be death, right?"

"Now, these old bones were the strongest among all mackerel."
"I was also once the strongest being in all the shallow seas,"
"And even sea beasts, whales, and sharks were no match for my might."
"And yet, even I would meet my match!"
"It was that kurage, or perhaps you might call them the jellyfish."
"Why, they just float along with the tide,"
"And yet, they can deflect any and all impacts."

"So then did I forsake the path of strength,"
"Taking up the path of the jellyfish."
"After a long, long life,"
"I became able to control every organ in my body."
"So I stopped my own heart,"
"And was not mistaken for fresh fish and sliced open."
"You may think that I am naught but a salted fish, 'tis true,"
"But allow me to become your strength."

"Now then, you who wield this old one."
"Hmm..."
"When all the waters flow into the sea,"
"When the final stars go out,"
"When everything returns to the primordial ocean whence they came,"
"Would you try yourself against me?" 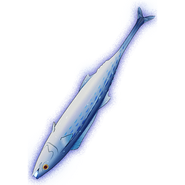