Lost Prayer to the Sacred Winds

Lost Prayer to the Sacred Winds

An educational tome written by anonymous early inhabitants who worshiped the wind. It has been blessed by the wind for its faithfulness and influence over the millennia.

The weapons's base stats before and after each Ascension:

Scriptures of the ancient winds, passed from generation to generation among the observers of ritual in service of the Anemo Archon.
Countless hands have touched the now-yellowing pages of this book, though any prints they left have since been carried away by the wind.

In the days of yore, when the ruling aristocracy pulled at puppet strings to control the masses,
The scriptures in the hands of slaves told of their envy and their desire for the thousand winds.

The people of Mondstadt lived, endured, fought, rejoiced, and enjoyed freedom.
As the precious years passed, the scriptures grew thicker and heavier.

When Mondstadt was born anew, and the Church finally unshackled,
The scriptures of the winds could bear no longer being confined to a shelf,
And so the book took flight, left the Church's treasury and was gone.
Like the winds of Mondstadt, and like the people of Mondstadt,
It belonged to freedom and the winds.

The elegant handwriting on the title page reads:

Children of the Anemo Archon, heed these words:
From the winds we have come, and with the winds we shall go.
Never, ever grieve for me.
'Tis but my flesh and bones which rest in the soil:
My soul has become one with the thousand winds.

When flowers bloom, when leaves sway,
That is me who sings the songs of freedom, of the winds. 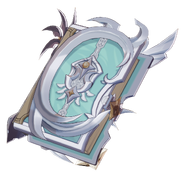 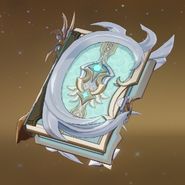 Lost Prayer to the Sacred Winds was promoted or featured with a drop-rate boost in 3 Event Wishes: