Sea of Clouds, Liyue
A prosperous port city where a thousand ships drop anchor. Under the aegis of countless contracts and regulations, innumerable goods change hands and grace the seven nations with their presence. Welcome to Liyue, wayfaring Traveler.

During the Archon War, after Guizhong died, Rex Lapis brought his people south of Mt. Tianheng, to found what is now known as Liyue Harbor. 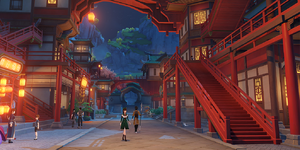 Here live those merchants who have made it. Here, the residents are prosperous and carefree. Here, the lights are bright and never go out. 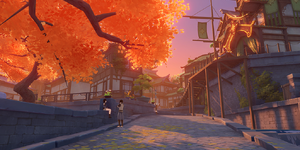 The ever-pulsating heart of Liyue Harbor that pumps lifeblood into its veins. The lively city scene here is the source of Liyue Harbor's limitless vitality.

Chihu Rock is the southern end of Liyue Harbor, between Feiyun Slope and the South Wharf. It is primarily a commercial area where many stores and vendors can be found. 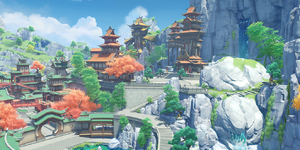 Far from the bustling harbor, the Yujing Terrace rises along with Mt. Tianheng. Here, the Qixing and the leaders of many enterprises tirelessly drive Liyue's prosperity and stability.

Yujing Terrace is the area on the northwestern side of Liyue Harbor, to the left of the northern Teleport Waypoint on the World Map. After teleporting to that waypoint, head straight and turn right.

Warning: "Please refrain from kicking the stone orb beneath the stone guardian lion. It is cracked and therefore highly fragile."

The following soundtracks are played at Liyue Harbor.