The area is mostly made of ruins with many puzzles to solve. 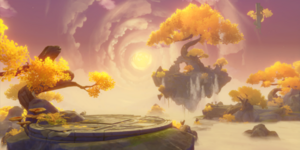 Domain of the Wayward Path

Someone's Poetry: There is a divine order to the world, for every mortal the end must come. Noble or evil, rich or poor, the creator shows favor to none. The cycle of life and death transcends in a boundless universe beyond. Thus we exalt the divine, and praise this rule with song.

Activate the 4 Geo Monuments by using a Geo skill on them. The northern Monument is not locked. To unlock the other ones, do the following:

Once the four Monuments are activated, a Wind Current will appear in the middle of the lake. Glide up to the floating platform and activate the fifth Geo Monument. A Precious Chest and 2 Exquisite Chests will appear on the stairs nearby.

According to legend, the ruins at Lingju Pass were once a stronghold established by Morax, where mortals and the adepti fought side by side. There are also vague tales about Morax's divine law, or "lingju" (Chinese: 灵矩),[1] which may relate to the poem found on a sign.

According to the puzzle at Qingxu Pool, which grants another one of the three Nameless Treasures, the ruins there date back to the Archon War. It is thus likely that the ruins at Lingju Pass likely date back to that era as well.