There are many different languages in Teyvat, most of them based on real-world languages.

Just as Teyvat has a spoken lingua franca, Teyvat also has a written lingua franca. The letters appear to be a mirrored and broken up version of Fraktur, a font that was typical for medieval Germany and that was still in use up until the early 20th century. As such, many of the letters are seemingly upside-down, mirrored Latin letters.[1] Unlike English, there appears to be no capitalization, punctuation, or spaces other than line breaks. However, there is a character identical to the letter "A," but written lower and closer to the previous character, that can be[2] (but doesn't have to be)[3] inserted when a sentence continues to the next line. This text is also used in tutorial images so that the same image can be used for multiple languages.

Long texts in this script include the Abyss Order's "ransom note" in the quest Darknight Hero's Alibi and Letter to the Treasure Hoarders during Currents Deep Beneath the Lanterns. In addition, the Liyue trailer "Of the Land Amidst Monoliths" shows Klee opening a book titled Teyvat to pages that contain the following text (spacing, capitalization, and punctuation added for legibility):

...reason that it's necessary for the peacekeepers of Liyue to keep an eye on the location. People nowadays have often forgotten that Liyue's peace and prosperity is not granted but earned from iron and blood, from perseverance and diligence. Legend also claims that the fallen Archon does not die but slowly emits their potency in which monstrous creature

One of the highest mountain of Liyue. It is told that there was a monster named Chi suppressed under

Dragonspine, signpost near the peak left by the Adventurer's Guild reading "Not Ice," or more likely, "Notice."

The base of the Anemo Archon's Statue reads "The Gateway of Celestia." 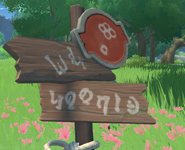 Threatening note from Missive of Cloud and Fog. It reads "To dear Miss Barbara, I have stolen and buried your most precious thing." (Spacing, capitalization, and punctuation added for legibility.) Note that this differs from the official English transcription.

Pages about Liyue from the "Of the Land Amidst Monoliths" video

The hilichurls also have their own language, Hilichurlian. A few Hilichurlian words and phrases have been successfully deciphered by analyzing the available in-game text.

Hilichurlian is the most understood distinct language of Teyvat. Unlike most other languages in Teyvat, which are mostly just existing languages such as English and Latin written in a cipher alphabet, Hilichurlian is lingustically distinct, with distinct phonology, words, phrases, and grammar. Hilichurlian is written using the Latin alphabet, however it is unclear if the Hilichurls themselves write their own language, or if the writing system was developed by humans such as Jacob Musk for the purpose of the transcription of Hilichurlian.

Hilichurlian is mostly an SVO (subject-verb-object) language, but SOV (subject-object-verb) constructions do exist.

Liyue has its own local language alongside the common language. Its written form is inspired by real-life Chinese characters, particularly seal script. Such script is common in Liyue Harbor around shops and other businesses — there is a very high degree of repetition of these symbols between shop signs.[Note 1] Other examples of this language can be seen on the Jade Chamber Intel Wall during the animated cutscene in the Archon Quest "Zhongli's Treat" and on bulletin boards around Liyue.

This script appears in several other Liyue character's Elemental attacks including: around Chongyun when Spirit Blade: Chonghua's Layered Frost is active, and when Zhongli's Dominus Lapidis Stone Stele breaks.

A stylized (or ancient) form of the Liyue script appears in Beneath the Dragon-Queller on the ground around the seal after Azhdaha is defeated.

The script on the ground around the seal after defeating Azhdaha.

There are few instances where characters in this script that have been deciphered and determined to be based on existing Chinese characters. In most cases, the characters closely correspond to seal script, an ancient form of the Chinese writing system.

A few characters appear in the center of the seal at the entrance to Beneath the Dragon-Queller. They are used to indicate which element Azhdaha will be infused with and are based on the Chinese seal script of these Elements: Electro (Chinese: 雷), Hydro (水), Cryo (冰), and Pyro (火). Note that the character for Electro has been simplified from its seal script form (靁) by replacing the 畾 portion with the symbol for Electro

Four characters also appear when Yanfei's Charged Attack leaves an impression on the ground. These characters have been interpreted to be based on the Chinese glyphs for 福 "blessing," 祿 "prosperity," 商 "business," and 印 "seal" or "stamp" (right to left, top to bottom).[5] The symbol identified as 印 is in fact identical to one seal script form of the character, while the other characters seem to be highly stylized.[Note 2]

There is also another Chinese character found in the game, which is the one on the Unusual Hilichurl's mask. This character is 伟 "Wei," the name of the CEO of MiHoYo. This character, however, does not seem to be in the same style of script.

The Element symbols for the domain Beneath the Dragon-Queller. From left to right: Electro, Hydro, Cryo, and Pyro. From top to bottom: the symbol in-game, the seal script, and the modern Chinese character. 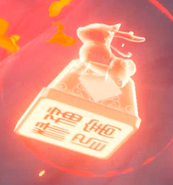 This language can be found all over Teyvat, usually in non-mundane inscriptions such as those relating to gods, alchemy, astrology, and in association with ley lines; it also appears when magickal seals appear, such as on some chests. The alphabet is based on Latin letters like the common written language of Teyvat, but the words and grammar are based on Classical Latin instead of English. Although there is no capitalization, there is punctuation.[6] Additionally a version of this alphabet is associated with the Abyss Order — and it may be that this was the script of Khaenri'ah.[7]

Examples of the use of this language are: 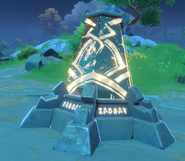 This text and language can also be seen in the Teyvat Chapter Storyline Preview, used to write Latin phrases for each nation's story theme. The sub-texts are:

The glyphs of the alphabet are divided into top and bottom half by a thin but deliberate gap — usually the full glyph appears, but in two cases only half of the glyph is shown:

Text under "Star of Destiny": caelum

This is a language observed to be used by Abyss Mages to manipulate hilichurls. According to their description in the Adventurer Handbook, this long-forgotten language is what gives the Abyss Mages their magical power. This script is based on the Enochian alphabet, but attempts to decrypt it have only yielded unintelligible text.

It can be seen as purple symbols above the Abyss Mage when it is manipulating hilichurls, such as in the commission Spreading Evil. The script also appears in the yellow protective runes around the weak points of Automatons, where the mirrored glyphs for B, L, and G circle around the core. Ruin Guards are known to have been made by the people of Khaenri'ah, so the text is possibly used by them as well.

This script has only been found on Adeptus Bridges. It is presumably used by the Adepti.

If you decipher the series of numbers in the Strange Notebook you get "The Fatui will strike the Golden House". The text can be deciphered by referring a book about Rex Lapis's death that can be found on Ningguang's desk. The code numbers are a modified book cipher, written in the format [sentence]:[word]:[letter]|[letter]. The letters from these codes will spell out the message.

Record of Serial No.

Nine Ruin Guards located throughout Dragonspine can be interacted with, giving you cryptic Record of Serial No. messages that altogether read "For the nation, we can't forgo this skyborne power, but we failed."

Retrieved from "https://genshin-impact.fandom.com/wiki/Languages?oldid=218358"
Community content is available under CC-BY-SA unless otherwise noted.