Katheryne, upon greeting the player

Katheryne is the receptionist for the Adventurers' Guild. She can be found at the guild's headquarters located in each of Teyvat's seven nations, indicated by the

She assigns quests for guild members including the Traveler, as well as intel about incidents occurring in the area.

By speaking to her, you can:

Multiple, identical Katherynes exist, all serving as the guild's receptionists. It is unknown if they have separate wills and memories, as dialogue in Chapter 2, Part 4 implies the Katheryne seen in Liyue has a connection with the one the Traveler meets in Inazuma. It is highly implied that she may be an android or some kind of artificial being, based on her idle quotes, identical appearance regardless of location, a keyhole-shaped embellishment on the back of her collar, and her occasional tendency to robotically say "Error" and "Rebooting." 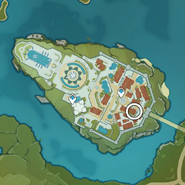 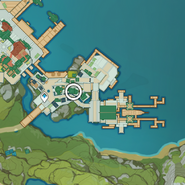 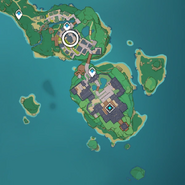 (Options after speaking to Katheryne)

(If not all commissions have been completed)

Media:vo tips entrust katheryne 01.ogg Katheryne: I am sorry, but you have not yet completed enough commissions.

Katheryne: Farewell, Adventurer, and thank you for supporting the Adventurers' Guild.

Katheryne: That's right. I am Katheryne, the receptionist here at the Adventurers' Guild.
Katheryne: It's my job to assign quests to our adventurers and provide intelligence support. Our service is all year round.
Katheryne: Is there something wrong, Adventurer? You seem... surprised?

...What are you doing here?
Katheryne: I'm sorry, I don't quite understand your confusion?
Katheryne: All Guild members should be well aware that Katheryne is the receptionist of the Adventurers' Guild. The Liyue branch can't go without a receptionist, can it?
Katheryne: Therefore, Katheryne is here.
Katheryne: ...Do you have any further questions?

Katheryne: Hello, I am Katheryne, the receptionist of the Adventurers' Guild. My job is to provide the adventurers with quests and intelligence support.
Katheryne: This service is available around the clock, so there is no need for concern.

Katheryne: Another? Hehe, have you ever seen more than one Katheryne at once?
Katheryne: If not, you have probably seen the same me each time. To meet the demands of the adventurers from all over the world, I use a special tool to teleport myself and work in multiple places simultaneously.

I'd love to teleport, too!
Katheryne: Oh dear, you actually believed that?
Katheryne: Sorry, that was a joke. Please don't take it to heart.
Katheryne: In any case, you probably know how to use the Teleport Waypoints, right?

Vishaps and Where to Find Them Event Banner