梶
Kaji is an NPC initially found in Fort Fujitou, Inazuma and gives the World Quest series Orobashi's Legacy. After completing it, he can be found in the Kujou Encampment. 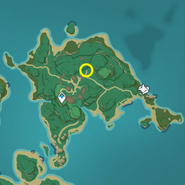 Kaji was originally a miner who lived on Yashiori Island along with his family. When a radical faction within the Watatsumi Army plotted to gain an upper hand in the war by destroying the Narukami Wards and restoring the slain god Orobashi's power,[1] they instead unleashed the power of its lingering hatred, the Tatarigami.

As the Tatarigami inflicted all sorts of illnesses, maladies, and corruptive influence around the island, Kaji and his family were forced to evacuate. Before leaving the area, Kaji discovered the Waterlogged Note near the Narukami Ward in Serpent's Head, which revealed the Resistance's involvement in the destruction of the wards. In response, he wrote a note of his own near the Narukami Ward, imploring Shogunate soldiers to come and seek him out in Musoujin Gorge. However, yet another note left afterwards indicates that the soldiers who found it — likely from the ill-fated expedition described in the Lost Texts — ignored it, believing it to be an enemy diversion.[2]

Unable to bear witness his home's destruction, Kaji continued observing it from Fort Fujito. When the Traveler visited, he implored them to help repair the wards on Yashiori Island to suppress the Tatarigami once more. The Traveler accepted and repaired the wards. While the Tatarigami that had leaked would still remain, no more would come out, making the islands a bit safer for those who were unaffected by the energy. Kaji gave them the blueprints for the Kitain Cross Spear as a reward, a weapon devised by the progenitor of the long-gone Yashiori Guardians, before making his way to Kujou Encampment.

(After completing Orobashi's Legacy)
Kaji: Hey, Traveler. How've you been?

Kaji: That's great!
Kaji: Just as I always say, the days will definitely get better.
Kaji: The Shogun's army treats us pretty well... It's just that we workers used to be in charge in the mines. Here, we need to listen to the soldiers.
Kaji: It's not all bad though. At least we have a place to stay. We just have to wait out the war...

Kaji: What did I tell you? The days would definitely get better!
Kaji: Kujou Masahito said that the rebuilding of Yashiori Island has begun. We're going home soon!
Kaji: *sigh* Though we don't know how long peace can last time this around, the thought of being able to go home still gets me all teary-eyed...

So, who's getting the credit?
Kaji: Ha! You think the Shogunate would believe that the two of us took care of the Tatarigami by ourselves?
Kaji: All they'll do is credit this whole thing to Her Excellency and sing songs about it in Tenshukaku...
Kaji: I'm just a worker seeking refuge with them. None of that credit's shining down on me, I'll tell you that much.
Kaji: Oh well, it's not like I care about it anyway. We workers from the mines just see it as helping others. Them city folks wouldn't understand.

Kaji: I see...
Kaji: Keep your chin up! Everyone's trying to get through this. Great things are definitely waiting at the end of it all!
Kaji: Though the soldiers are always telling us to do this and that... at least the Tatarigami are no longer a threat, right? That means we're getting closer to finding peace!
Kaji: Hang in there! Things will get better!

Kaji: I see...
Kaji: Keep your spirits up! Good things will eventually come around!
Kaji: The Shogunate and the rebels signed a peace treaty! That means that there's a chance the mines will return to normal.
Kaji: Though the ceasefire is a good thing, I can't help but think of the victims in Higi Village...
Kaji: I wonder how long it'll take for that place to recover...

Keep up the good work, then.

Kaji: I will, take care!