Minlin, Liyue
They say that the adepti dwell somewhere within these countless towering, cloud-ringed peaks. Few mortals may set foot here.
Where Mountains Peak Beyond the Clouds
Jueyun Karst is considered the realm of the adepti of Liyue, usually unreachable by mortals.
However, there are special "Herb Gatherers" who make their living by collecting valuable natural resources found only in Jueyun Karst.
Expedition description

Jueyun Karst (Chinese: 绝云间 Juéyún-jiān, "Cloud-Terminating Place") is a subarea in Minlin, Liyue. It is said to be the place where the adepti live. Normally no one dares to try to set foot here, but some brave or desperate people still try to seek the adepti for good fortune.

There are two Teleport Waypoints in this area: southwest of the domain Taishan Mansion, and another to the west leading towards Guili Plains. 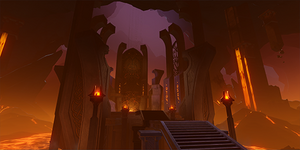 Someone's Poetry: "Here the flowing waters reach their wondrous end, with fond farewell into dreams of gods ascend. As cascades split cliffs and into the air splash, I stand at peace beneath soaring eaves vast."

Read: "Walk to the view of the changing tide, arrive to the sight of a misty shroud. Ascend to Jueyun Karst up in the skies, sit and gaze at the unfurling clouds."

Right above Taishan Mansion is a stone tablet hinting at the puzzle, although interacting with this tablet is not necessary.

Read: "Here stood Taishan Mansion, established by royal decree. ...But the Geo Lord wished for his residence to remain among the people of Liyue, hence, all trace of the path to that divine place was lost in the mortal realm. Now, the hidden treasure of Taishan is engulfed in water. At the sight of these words, people should leave immediately, as they should at the sight of the adeptus."
Paimon: So this inscription means... Well, Paimon didn't get all of it... but it seems like there's treasure hiding somewhere in a body of water!
Paimon: So is there anywhere around here that water might come out?

Near the steps leading to Taishan Mansion is a glowing monument. To break the seal around it, defeat the three waves of enemies guarding the monument.

Climb up to the monument and "Start" it. The water covering Taishan Mansion will drain partway, exposing the second glowing monument down the stairs.

Break the glowing Geograna ores and lead the Geograna to the stone lanterns surrounding the monument. After lighting all three lanterns, the seal around the monument will break, allowing you to "Start" it. More water will drain away to expose the entrance of Taishan Mansion.

Paimon: The water level has gone right down.