Materials
A spicy plant native to Liyue.
Merely smelling it makes one hot and thirsty.

Found in the wild in Minlin, Qingce Village and Stone Gate

Gardening with Jade Field
A spicy plant native to Liyue. Merely smelling it makes one hot and thirsty. Despite "Jueyun" being a part of its name, it does not usually grow in Jueyun Karst. The name seems to originate from its spiciness, which makes people want to run to the highest peaks of Jueyun and cool their mouths with chilly air.

Jueyun Chilis are a Local Specialty found in various areas of Liyue.

Jueyun Chilis grow in group of three on a single stem. They are found in the wild exclusively in Minlin, Qingce Village and Stone Gate.

Additionally, the following NPCs give Jueyun Chilis after following a certain dialogue branch for the first time:

There are 12 items that can be crafted using Jueyun Chili:

1 Characters use Jueyun Chili for ascension:

No Weapons use Jueyun Chili for ascension. 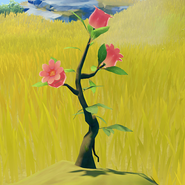