Materials
This iron chunk can be turned into a multitude of handy items in the hands of a skilled craftsman.

Found in the wild

Sold by Qiuyue and Shitou

NPC Gifts
This iron ore can be turned into a multitude of handy items in the hands of a skilled craftsman. Mineral ores' presence on the surface usually indicates abundant ore veins underneath.

Iron Chunks are a Forging Material item. They are used when forging for Enhancement Ore and to create a variety of Furnishings.

Iron Chunks are generally found inside caves, mines, and near mountainous terrain all around Teyvat.

They can be harvested by attacking their destructible nodes, dropping 1-3 Iron Chunks. Like all Geo Constructs, it is faster to destroy them using Blunt Attacks and Geo abilities. Their respawn rate is 24 hours.

In Co-Op Mode, each nearby player will get their own drops with amounts randomized separately and players will not be able to see others' drops. Unlike most Materials, they cannot be affected by Anemo abilities that may move them.

They can also be dropped by some Investigation points and are awarded upon completion of some Expeditions.

Additionally, the following NPCs give Iron Chunks after following a certain dialogue branch for the first time:

There are 2 items that can be crafted using Iron Chunk:

There are 33 items that can be crafted using Iron Chunk: 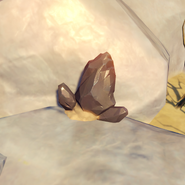