Hidden Protector of the Grove

이오로이 Ioroi
Ioroi is a bake-danuki who lives in Chinju Forest, formerly serving as its protector. He often competed with the Kitsune Saiguu up until her death during the cataclysm 500 years ago.[1] Unaware that she had died and believing that she was simply hiding, Ioroi wreaked havoc across Narukami Island in an attempt to lure her out. Instead, he was sealed away by Kamuna Harunosuke, one of the Yougou Three and a former acquaintance of Saiguu's.

Ioroi can be interacted with following the Sacred Sakura Cleansing Ritual series quest Hayashi of Tanuki in the Forest. 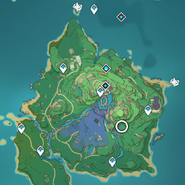 Ioroi was a bake-danuki who dwelt in Chinju Forest and often competed with the Kitsune Saiguu, whom he calls "that sneaky kitsune." One day, for reasons unclear, she decided to play both Ioroi and Raiden Ei at the same time; she challenged Ioroi to pluck a Naku Weed from the Tenshukaku garden. Beelzebub caught him in the act, however, and nearly slew him. He was saved by the Kitsune Saiguu's intervention, who pleaded on his behalf and persuaded the Archon to put Ioroi under her command as Protector of the Grove.[1]

Five hundred years ago, the cataclysm struck Teyvat. The Kitsune Saiguu decided to protect Ioroi from the dark forces by tricking him into hiding via a game of hide-and-seek. Afterwards, she went to battle and eventually died in the conflict. Ioroi, unaware of the full extent of the strife, simply believed she was still playing the game. When his usual antics failed to cause her to emerge, he began going around breaking the kitsune statues and, in one of them, found a comb used for the Sacred Sakura Cleansing Ritual. Deciding it was probably important to Saiguu, but unaware of what it was used for, Ioroi took it.

The Inazuma Shogunate learned of Ioroi's actions and dispatched Kamuna Harunosuke, an onmyouji who had returned from Liyue after departing for several years following Saiguu's death, to deal with the bake-danuki. Harunosuke ultimately sealed Ioroi and many of the bake-danuki away into stone statues to teach them a "lesson."[2]

Ioroi: Once upon a time, I was the renowned bake-danuki, Ioroi. One of these days, I will definitely use eight huge...
Ioroi: Oh, it's you... Ahem... Our fates are twined now, so ask me whatever questions you may have.

Ioroi: I may just be a stone statue now, but I was once a big shot known as Ioroi, the Hidden Protector of the Grove.
Ioroi: My job was to guard the Chinju Forest and everything in it. And as you can see, I've done a fine job indeed!

Wait, weren't you being attacked by those hilichurls back there?

Ioroi: Eh? Oh, you misunderstand. The hilichurls mean no harm to me. It's just that I haven't been able to look for people to play with ever since being turned into stone. They're the only ones who have kept me company.
Ioroi: At first, I thought you were here with ill intentions because you're human. That's why I had them go after you. But it's good that you're okay.
Ioroi: Though we can't communicate and they may be a little dull-witted, I'd still count them among my companions after all this time.
Ioroi: It is strange, though. There didn't use to be this many hilichurls in Inazuma. I can't remember when that started...

Protector of the Grove?

Ioroi: I used to be a bake-danuki, free as can be! I wasn't famous or anything, but I was free indeed, and I had that sneaky kitsune around to compete with often.
Ioroi: One day, the kitsune made a bet with me, claiming that I wouldn't be able to steal the Naku Weed from the Shogun's imperial garden. I accepted the challenge and almost got split in twain for it, just like Yashiori Island.
Ioroi: And in the end...
Ioroi: In the end, that sneaky kitsune pleaded with the Shogun on my behalf, and I was spared. Not only did the Shogun let me live, but she also bestowed upon me the sacred duty of the Protector of the Grove.
Ioroi: I will never forget what happened. I owe my life to that sneaky kitsune...

Tell me a bit more about yourself.

Ioroi: Our kind have always lived on the lands of Narukami. Is there something confusing about that?

How did you end up being sealed?

Ioroi: Err, how would I know...
Ioroi: Wait, it's probably because I stole that comb.
Ioroi: Like anyone would've known that the comb was meant to be used to make Sacred Sakura Daifukus!
Ioroi: So, the sneaky kitsune had stopped appeared since challenging me to hide-and-seek that day.
Ioroi: I tried everything to lure her out. I would cause all sorts of ruckus, knowing that she would always come and stop me.
Ioroi: I turned the Lavender Melon in Konda Village into potatoes, and Sunsettias into tigers. The sneaky kitsune would normally turn up to stop me at that point, but this time was different.
Ioroi: So I felt really angry afterwards and decided to go and destroy the statues of her kin. This was when I discovered the comb.
Ioroi: I thought to myself, "that sneaky kitsune would surely be flustered and appear if I stole this comb." So I did.
Ioroi: In the end, a young human appeared instead of that sneaky kitsune. If mine mind serves me well, he was one of the three who learned their arts from the Yougou Tengu.
Ioroi: I had no idea why he was so strong, but he was able to seal me and the others into the stone statues.

About your bout with the kitsune...

Ioroi: Terrible, isn't it? That kitsune dared to challenged me to hide-and-seek.
Ioroi: She even said "Don't show yourself for anything," "If anything happens, it's me using spells to provoke you." Weird, right?
Ioroi: I'm a bake-danuki, as well as the Protector of the Grove. Naturally, I couldn't turn down a challenge of hide-and-seek in the Chinju Forest.
Ioroi: I found a great spot and turned myself into an Onikabuto, so I could watch as she ran all over the place looking for me!
Ioroi: However, she never came, and so the challenge goes on.
Ioroi: I will keep waiting for that sneaky kitsune to come back and apologize to me. Hmph, actually, there's a lot she needs to apologize for! I'll have her know that I'm keeping score!

Ioroi: The Chinju Forest used to be the territory of yours truly, Ioroi, the Hidden Protector of the Grove, and my kind, up until that human turned us into stone.
Ioroi: So if you see stone statues that look like me, there's probably a bake-danuki sealed inside.
Ioroi: However, the seals seem to have loosened recently. Kichiboushi and the others have returned to their original form, so there's still hope for me yet.
Ioroi: Hey, can you promise me something?
Ioroi: Be nice to my little bake-danuki when you see them out there.
Ioroi: They've been sealed for so long... All they want to do is see the outside world.

Ioroi: Ah, that person would probably recite some complicated poem right now... See you around.
Ioroi: Come and play with me when you are free. I mean... I'm a stone after all, so I've got nothing but time to play.