A famed work by the Futsu line of smiths. The name "Haran" comes from the manner in which it resembles the violent, roiling waves.

This blade was recorded in the "Anthology of Inazuman Blades" written by Inspector Mikoshi Nagamasa of Tatarasuna.
There were two swords of the "Geppaku Futsu" series made by the Futsu school by order: "Hasui," the Wavespike, and "Haran," the Rippling Upheaval.
Of these two, the "Haran" is the sole blade forged by the great smith Masagomaru that remains extant.

Many say that blades are indwelt with the souls of those who forge them...
This is how the Anthology begins.
It is said that the Hasui blade was forged by the third-generation master of the school, Master Futsu Minori.
Its blade was a pale blue, and its hamon was as beauteous as rippling water, and so it was oft found at the waist of the Shogun's valet.
Later, the blade would be broken during a mortal duel to decide the fate of the oni people, and was sent back for reforging.
At this time, Minori, who had by now been long tortured by alcohol, old wounds, and the lingering memories of Tatarigami, was a broken woman, not unlike an untempered steel sword.
Nor could the fourth-generation head Futsu Hiroyoshi match his mother's skill.
It was his sworn brother, Futsu Masayoshi, the one they call Masagomaru—
He was the one who would forge this weapon, allowing the Futsu school's masterpiece to re-enter this world.
The two Geppaku Futsu blades look very similar to one another, but their qualities are in fact vastly different.

Masagomaru would only come to name this one work, and the reason why that happened is quite simple, really...
He was an orphan taken in by the third-generation master, illiterate by education and aphasic from birth.
When ordered to revive the beauty of the "Hasui" blade, he inscribed its name just as it had been before.

When Futsu Minori passed on, Masagomaru would help her pass her forging techniques on to Hiroyoshi.
Indeed, it is said that she had wished for him to take up the mastery of their school, but he demurred multiple times.
Indeed, the fame from the forging of the "Haran" very nearly affected Hiroyoshi's succession to be the fourth-generation head.
As such, safe in the knowledge that his sworn brother was now independent, Masagomaru would choose to depart for other lands.
Later, he would approach other forging schools, gleaning gems of wisdom from other famed smiths.
In his latter years, he would have three pupils that he was most proud of: Kaedehara Kagemitsu, Niwa Nagamitsu, and Akame Mitsunaga.
These three would create the "Isshin Sansaku," the three great works of the Isshin Art.

"Then, I was but a born-mute, an ugly, filthy, abandoned child."
"Like a moth, I longed for warmth in the bitter, cold nights, and what I found was the forge-fires of the smithy."
"Standing before me was the third-generation master, she who people called surly and arrogant."
"But she did not bid me to get gone, and even gave me some rice to fill my stomach."
"Seeing that I was covered in metallic sand, she named me 'Masagomaru.'"

Unable to speak but subtle in thought, Masagomaru must have had many stories hidden away in his heart.
All those unsaid things would finally sink as sediment, disappearing beneath the waves...

"The third-generation master would tell me, one who could not speak, a great many things."
"Like the old wound that afflicted one side of her body, like the wishes of her mother and brother,"
"Like the crimson hakama she could never wear, and the giant wave that would one day devour everything..."

One night, the child would enter the smithy, seeing the famed but capricious smith within.
She hammered at a chunk of iron, not caring as tears streamed down her face...
"You forget what you just saw. We clear about that?"
He nodded, flustered. Then the woman suddenly clapped her hands together and smiled broadly.
"Right, silly me! You're a good friend, a real keeper of secrets!"

"I suppose it is as they say: one who leans into the drink is themselves not to be leaned on too much."
"But now that I think about it, I should still have accepted her offer to drink together..."

The "Anthology" also speaks of the differences in form between the Geppaku Futsu blades.
The one forged by Futsu Minori was as gently beauteous as the ocean at night, and thus was named "Hasui."
The one made by mute Masayoshi was formidable as the driving hurricane, and was thus called "Haran."

This weapon was originally forged by Futsu "Masagomaru" Masayoshi in Inazuma, at an unknown forge. There is a matching, currently unplayable sword known as the "Hasui Geppaku Futsu", which was forged by Masayoshi's mother, Futsu Minori. 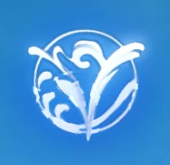 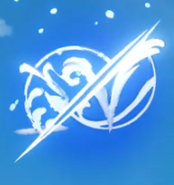 Haran Geppaku Futsu was promoted or featured with a drop-rate boost in 1 Event Wishes: