Quests
Hangout Events are special Story Quests that can be replayed and have multiple endings. This feature was made permanently available after the Version 1.4 update.

During the quests, the different choices Travelers make in dialogue will influence the direction of the story and lead to different endings. Every quest possesses a Heartbeat Value, but not all of them will utilize this feature. This value can increase or decrease depending on the Traveler's responses. If the meter fully empties, then the quest will fail.

Decisions that branch into different scenarios will also serve as checkpoints to be returned to so the player can unlock different endings. These endings can be placed on Lingering Moments in the Serenitea Pot mansion.

Rewards can be obtained from these events depending on how many endings the player has accomplished. Rewards from these endings include primogems, Adventure EXP, Hero's Wit, the character's talent upgrade, character ascension materials and their speciality dish.

Hangout events also award Memories of the Heart achievements. Generally, there is one achievement gained by unlocking all endings, with other hidden achievements that are based on doing various tasks during the hangout. 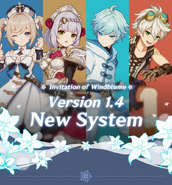