The Hanamizaka Bulletin Board is a message board located in Hanamizaka in Inazuma City. The messages randomly cycle through every time it is interacted with. The first set of messages is replaced once Sangonomiya Kokomi's Story Quest, Warriors' Dreams Like Spring Grass Renewing is completed.

It can be found north-east of the northern Teleport Waypoint in Inazuma City.

Hanamizaka Bulletin Board: This Hanamizaka bulletin board was set up by the Shogunate. Notices regarding all sorts of matters will be posted here. Do not post without authorization.

Message: "Night-time robberies, piracy, and false documentation have been rampant in Inazuma lately."
Message: "Smugglers, illegal traders, people stirring up trouble"
Message: "Imprisonment, bribery, people who travel freely"
Message: "Mandatory draft, stagnation, exploitation, and deceit"
Reply: The above are all lies. None of this is true!
Reply: Any vandal caught will be punished severely by the Tenryou Commissioner!

Message: "I heard that another shipment of goods was stranded in Ritou due to piracy."
Message: "This is ridiculous! Piracy hasn't been a problem for centuries ever since the end of Ako Domeki's reign of terror."
Message: "As it stands, the Sakoku Decree has actually helped to revive smuggling and piracy..."
Message: "If this is the will of Her Excellency the Ogosho... the will of an Archon, us mortals simply cannot fathom its meaning."
Reply: It would be advisable for you to not attempt to fathom it.

Tenryou Notice: The fight against the rebels proceeds apace. Only one more strike, and they shall be destroyed completely.
Tenryou Notice: We hope that all young samurai will join together and fight to accomplish this great work!
Tenryou Notice: Come join the army! Or you may regret not having done anything for your country when the war is over!
Tenryou Notice: Please visit the Tenryou Commission for information about joining the army.
Tenryou Notice: Attention! Families that have received draft orders must send at least one adult to join the military.
Message: "This 'final strike' has been going on for three months... and yet the resistance has not been put down."
Tenryou Notice: What right do those who haven't joined the army have to criticize the samurai fighting on the front line? It's because of their protection that you are able to complain!
Message: "I am too old to take to the battlefield, and I thank all the young people for their contributions... it's just that my three sons have yet to come home."
Message: "Could the Tenryou Commissioner please grant my son a few days' leave to come home so that I shall not have any lingering regrets on account of this war?"
Tenryou Notice: We hope for this father's kind understanding on the matter. We know that everyone has family members at the frontline and everyone is restless, but please bear with us a bit more. Victory will be ours soon.
Message: "Let's hope so. Let's hope so..."
Tenryou Notice: Defacing of military draft notices is prohibited! Anyone caught again will face a heavy penalty!

Tenryou Notice: A number of suspicious outlanders have entered Inazuma lately, wandering around with seemingly sinister motives.
Tenryou Notice: The Shogunate hereby notifies everyone: those who report suspicious persons will be rewarded, while those who harbor them will be punished!
Tenryou Notice: Glory to the Shogun and her everlasting reign!

Arataki "The Man" Itto: "Kujou Tengu! I think the entrance to Hanamizaka is a good spot for a sumo duel! Where are you!?"
Arataki "The Man" Itto: "Put all that military and governance stuff aside for a day, and let's have a good match! Or did you leave your samurai honor on the battlefield where you dropped it?"
Message: "Huh. Come to think of it, I haven't seen a single public sumo match held on any street ever since the Sakoku Decree took effect."
Another Person's Message: "Madam Kujou Sara, please assent to Mr. Arataki's challenge for once! This might be out of line, but we too would like to witness your might!"
Reply: Dear citizens, please do not join hands with those who harass public officials and vandalize public property!
Reply: Madam Kujou Sara has given us repeated assurances that she has nothing to do with this person!

Message: "Children and parents of the city and beyond: if you should be bullied by a red oni with long horns such that you lose toys, cards, Onikabuto, snacks, picture books, and things of this kind..."
Message: "Please come down to Hanamizaka and look for Kuki Shinobu. I will do my best to return the lost items to you. Regrettably, I will not be able to help you with toys that have been broken or food that has already been consumed."
Arataki "To the Victor Go the Spoils" Itto: "Hey, hey, Shinobu, you aren't taking pity on the vanquished again, are you?"
Arataki "To the Victor Go the Spoils" Itto: "Those are trophies, you know? Trophies! I won them fair and square — and it was a lot of effort, too! You can't just give them all back just like that!"
Message: "Oh, is that so? In that case, I won't drag you back the next time that tengu woman beats the snot out of you."
Arataki "The Undefeated" Itto: "Oh, come on, don't be like that!"
Message: "You know, it's your fault that I'm more acquainted with every Doushin in the Police Station than I ever needed to be..."
Arataki "No Prison Food For Me" Itto: "I never asked for you to get me out of there! Also, what's with that psychiatric evaluation you used to bail me out last time? Were you making fun of me!?"
Tenryou Notice: Due to citizen reports, the two people who vandalized this noticeboard have been detained.
Tenryou Notice: We are familiar with one another, yes, but please control yourselves.

Message: "Konda Village has a large dye field that is presently in need of re-cultivation, and we are short of manpower to accomplish this task. As such, I'd like to ask for some help from some youngsters from the city."
Message: "Our village is far from rich, but as long as you're willing to work, I, Konda Densuke, promise that you will be well compensated!"
Message: "Those of you with families can bring them here to Konda Village. Food and board will be provided by us, all the better to make the village thrive more!"
Another Person's Message: "Chief, wouldn't it be better just to do some paid tourism or something rather than make advertisements like this one?"
Message: "Oh, shut it with your crazy ideas! We're not taking anyone's Mora!"

Message: "Seirai Island is being plagued by pirates once more, and the Yashiro Commissioner's reconstruction proposals have been delayed time and time again by the war..."
Message: "Thankfully, a ceasefire has been signed. Perhaps now the Asase Shrine there can finally be refurbished."
Message: "It's just that it's been several hundred years now. Who knows how many of the descendants of Seirai Island's inhabitants still have some impression of their homeland..."

Message: "My young samurai friends, the doors of Shimura's are always open to you!"
Message: "Lost your job? Not lucky in love? Whatever your troubles, come over here for a drink or two!"
Message: "I, Shimura Kanbei, will welcome you any time!"

Shogunate Announcement: We urge all citizens to remain calm. The Tenryou Commission's stability and its management of Tenshukaku's defense are now in Madam Kujou Sara's capable hands.
Shogunate Announcement: Rest assured that Kujou Takayuki's militant brutality, forced seizure of Visions, and suppression of the citizenry is now being reversed post-haste! 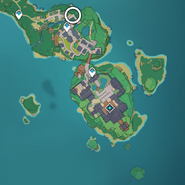