Sea of Clouds, Liyue
The proud, lonely stone mountains here are said to have been the place where Rex Lapis subdued a great sea monster. They say that those sensitive of heart can sometimes hear a strange, stirring rhythm emanating from deep within that oceanic abyss.
A Drop in the Ocean
The people of Liyue would say the Guyun Stone Forest is more of a vista to behold than a place to physically visit. However, visitors from afar heed no such warnings.
Legend has it that the Guyun Stone Forest served as a forest of tombstones for the old gods. Unique materials and resources can be collected here.
Expedition description

Guyun Stone Forest (Chinese: 孤云阁 Gūyún-gé, "Lone Cloud Pavilion") is a subarea in the Sea of Clouds, Liyue. It is an archipelago of seven large islands and smaller offshoots. The northernmost island houses the Geo Hypostasis, and the island to the southwest holds the Domain of Guyun.

According to legend, this is where Rex Lapis defeated a god and sea monster known as Osial, and the jagged cliffs protruding from the islands at Guyun are in fact the remnants of the stone lances he used in that battle. It seems that those who spend the night at Guyun Stone Forest may experience Osial's memories of its defeat;[1] whether this is caused by Osial's power or another phenomenon is unknown. 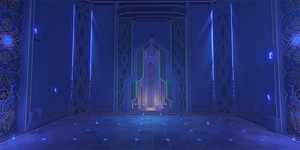 On one of the southern islands is a Ruins Treasure. From a distance, you can see a pillar of light above it. This ruins treasure is related to the one in Mt. Aocang, and tells the story of a disciple determined to vanquish all the monsters in the world.

My fellow disciple and I trained in the martial arts from childhood. Our quest was to fight the forces of evil and protect all that is sacred in this world. But this was no easy task without the aid of a Vision.
We two sought refuge here to train ourselves further and to seek the Visions that we desired. We erected this monument in testament to our endeavors.

But now that my fellow disciple has obtained his Vision, instead of battling against monsters, he asked me, "Are monsters truly evil by nature?" So I replied to him, "They wreak havoc all across the world, and innocent people are the ones who must suffer the consequences. Is that so insufficiently evil that you should stay your blade?" I do believe an excess of meditation has fried his brain!
Well, I still intend to take on these monsters — even if it means doing so without him, and even if it means doing without a Vision.

Monsters are the bane of all that is worth living for in this world. Those of us who are skilled with the blade are duty-bound to hunt them out of existence.
Monsters are evil! They deserve nothing more than the merciless slaughter they will get!