Qiongji Estuary, Liyue
Once, this was a thriving city where a certain flower bloomed in abundance. But all dreams must turn to waking. This earthly paradise was consumed by war, and those who gathered here were once again scattered.
Ruins of Guili
This plain near Liyue Harbor used to be the location of a prosperous village.
After many misfortunes, it has been deserted, leaving nothing worthy of interest.
Expedition description

The Guili Plains (Chinese: 归离原 Guīlí-yuán) is an area in central Liyue. It was the central area of the Guili Assembly, the ancient civilization ruled by Guizhong, the God of Dust, and Morax, the God of Geo.

Unfortunately, during the Archon War, Guizhong died trying to defend her people, and the place was destroyed. After her death, Rex Lapis took his people and brought them south of Mt. Tianheng, where he established Liyue Harbor. 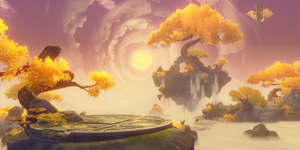 Paimon: Hey, it looks like this stone tablet has some kinda inscription on it.

Paimon: Look at this weird stone tablet. What is this writing?

Paimon: There's some writing on this stone tablet. But Paimon can't read it...

Paimon: Hey, look! That stone tablet has some writing on it...

Paimon: There's writing on this stone tablet! Paimon can't understand it, though...

Paimon: Hey, there's some writing on this plate! ...But it's barely readable.
Paimon: Paimon feels like it might have some special meaning.