Version 1.6
Version 2.8
The Golden Apple Archipelago was a limited time area located east of Mondstadt that appeared in Version 1.6 and will appear again in Version 2.8 with a different look. It was historically known as the Haar Islands before the events of Midsummer Island Adventure. This area contains a set of islands that the Dodo-King invited Klee to in the quest Mysterious Islands: Journey to the Unknown.

The archipelago is the first location released where the player can be introduced to the Waverider system. Initially only a handful of small islands, the archipelago turns out to be a cluster of multiple mountainous islands after completing Summer Vacation: Proceed With Caution.

If the player did not participate in the Midsummer Island Adventure event, they can finish the Summer Gift quest to receive the Wind-Blessed Harpastum to complete the various puzzles.

Many of the archipelago's elements have later reappeared at Inazuma.

These islands are isolated from the outside world, like a secret Domain crafted by nature itself.

According to Venti, the archipelago used to be called the Haar Islands. At least one island was created during the terraforming of Mondstadt; as Barbatos reshaped the region, he split off a chunk of a mountain which landed upside-down in the sea to become the archipelago.[1] Lisa also mentions it "belonging to no nation", likely meaning it is located in neutral waters.[2]

The area appears to be operated by an unusually large mechanism that has not yet been revealed.[3] Initially, the islands were covered in dense fog, which made travel to the islands extremely dangerous and inaccessible to most. This, along with the changing tides and winds, also made it difficult to escape once anyone made it to the islands. While hilichurls can be found on the archipelago both before and after the islands' rising, it is unknown if the hilichurls had been there first or somehow sailed to it.

Civilization began on the Haar Islands with one shipwrecked group that lived on the archipelago for many generations. Many people tried escaping; it remains unknown if any of them were successful. Around 500 years later, Ako Domeki and his pirate fleet were shipwrecked on the island after Asase Hibiki unleashed a Thunder Manifestation during a battle between his and the Shogunate's forces on Seirai Island. Domeki's fleet also included a stolen samurai puppet that protected the islanders until it was damaged and rendered inactive. Then, with the help of the pirates, an escape route was devised that took advantage of the archipelago's unusual features. As it seemed likely that the escape route would work, everyone left the islands.[4] It is not known what happened to the local inhabitants. However, Domeki and his fleet returned to Seirai Island, which was now in ruins.

Some years after the archipelago became abandoned, the events of Midsummer Island Adventure occurred in the present day. Klee received a letter from "Dodo-King" threatening to take Dodoco away from her unless she could prove herself. With the assistance of the Traveler and Paimon, Klee was able to find the location of the archipelago as well as the means to get there, with Acting Grand Master Jean and Deaconess Barbara also deciding to come with her for her safety. The five were taken to the archipelago by Dvalin, summoned by Venti. There they would begin looking for "Dodo-King" and learn about the archipelago's mysterious history in the process.

The group is eventually joined by Kaeya, Diluc, Albedo, and Razor, who were also flown to the archipelago by Dvalin but became separated when Razor jumped off mid-flight. Each also received a letter from Dodo-King with varying, personal messages catered to their concerns, causing everyone to become wary of the true identity of Dodo-King.

After solving the mystery, it is revealed that Alice, Klee's mother, had brought the group to the archipelago so she could ensure that her daughter had a memorable summer vacation. She had visited the area before and found the scenery and history beautiful and spent some time dressing up the islands for her daughter's enjoyment.

Once unlocked, the archipelago can be accessed in the Map via the Map Tabs, alongside the Teyvat map and Serenitea Pot map. Upon zooming out, the names of the four subareas will appear:

In Part I, each Isle has 1 Teleport Waypoint and 1 Waverider Waypoint. The player starts on Pudding Isle. One can follow the Glimmering Beacons to unlock the Teleport Waypoints in a "counterclockwise" fashion, heading north to Twinning Isle, then west to Broken Isle, then south to Minacious Isle. However, it's easier to click "Navigate" on the locked teleport waypoints and go directly towards them from there, in whichever order you wish.

Initially, the entire archipelago is filled with dense fog. However, after unlocking the four Teleport Waypoints, the fog lifts, turning bright during the day. The sun glows gold like an apple in the sky, revealing the tropical backdrop of the archipelago. The background music will also change into a relaxing tropical theme.

In Part II, some more islands (like the Central Platform) emerged along with new Waypoints. Sea Ganoderma appeared as well. Fog and fog-like conditions appear in certain parts of the archipelago, mostly tied to World Quests.

After completing Dodo-King of the Sea: Lying in Wait, the player can challenge the Maguu Kenki at the Central Platform, similarly to the other Normal Bosses.

The following characters can be interacted with as NPCs during Parts III and IV of Midsummer Island Adventure: 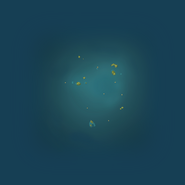 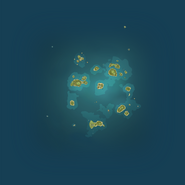