Materials
An extremely ancient flower that was said to be commonly seen in Liyue. It transforms the memories of the land into its fragrance during florescence.

Gardening with Luxuriant Glebe
An extremely ancient flower, said to have once been a common sight in Liyue. It transforms the memories of the land into its fragrance during florescence. Legend has it that the flower will open at the sound of pure, beautiful music, and that there was once one who loved this flower more than any other. Now, however, the sight of a Glaze Lily in full bloom out in the wild is a rare one indeed.

Glaze Lilies are a Local Specialty of Liyue found in Liyue Harbor and Qingce Village.

Glaze Lilies grow exclusively in the terraced fields of Qingce Village and in a few areas of Liyue Harbor, mostly in Yujing Terrace but not exclusively, as a small group is found near the Teleport Waypoint of Chihu Rock and a lone one is located on Mt. Tianheng, overlooking the city.

Additionally, the following NPCs give Glaze Lilies after following a certain dialogue branch for the first time:

There are 1 items that can be crafted using Glaze Lily:

2 Characters use Glaze Lily for ascension:

No Weapons use Glaze Lily for ascension. 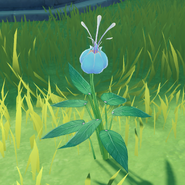 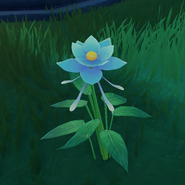