Liyue
Invincibility Frames
A young vishap with a hard Geo exoskeleton.
Vishaps are exceptionally agile creatures that one would be wise not to underestimate in battle. Experts from Sumeru Academia believe that they become dragons when fully grown. By avoiding predators and natural disasters, perhaps they can even live long enough to become formidable beasts that reign over entire mountains.
Adventurer Handbook

Geovishap Hatchlings are Elite Enemies that are part of the Vishaps enemy group and the Mystical Beasts family.

Geovishap Hatchlings are fairly easy to defeat but irritating at most. Their spin attack is particularly dangerous, as it can deal heavy damage while constantly staggering the player. They also have a habit of frequently burrowing, which makes them invulnerable to all damage during its animation.

When the hatchling burrows, it leaves behind two Geo crystals which may be picked to form a shield. After reappearing, the hatchling tends to roll around uncontrollably in the surrounding area, or charge straight at the player. If it runs into a player protected by a shield, either from the crystals it leaves behind or through a character talent, it will be flipped over and attempt to get back on its feet, leaving it vulnerable and open for attack for several seconds.

Due to the Geovishap Hatchling's tendency to erratically move around, the Frozen reaction can be especially effective at extending its window of vulnerability.

Geovishap Hatchling locations can be pinpointed on the map by using the Adventurer Handbook. 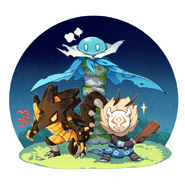 Official Artwork for the Legend of the Vagabond Sword Event 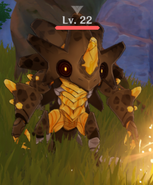