In the wild, you may come across oddly-shaped crystals in which live Geograna. These curious Geo beings will follow you around. Take one near a certain lamp-shaped object and see what happens...

Geograna are Grana that reside within jagged, brown rocks with glowing cores, and can always be found near Geo Lamps. These rocks are Geo constructs that can be destroyed, most easily with claymores or Geo DMG. Once the rock is destroyed, the Geograna inside becomes temporarily attached to the player. Even when the player teleports to a Statue of The Seven, the geograna will still follow them for its intended duration.

After a certain amount of time, Geograna rocks will respawn, even if the nearby Geo Lamps have already been lit up. A puzzle consisting of multiple lanterns can be completed by using the same Geogranum repeatedly.

Geograna can be found in Liyue.

Geo Lamps are typically used in open world puzzles and lighting all the Geo Lamps in an area can result in one of many possible effects, such as spawning chests, lowering water levels, or opening doors. 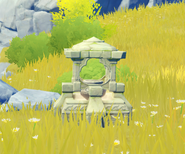 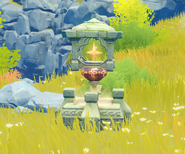