Progression
Game Systems
Friendship Level is the progression of a character's bond with the Traveler. This progress bar is raised by obtaining Companionship EXP. All Characters in the Party gain the shown amount equally; removing or adding Characters to the Party does not give the other Characters more or less EXP.

Companionship EXP can be gained through the following methods:

Note: The EXP given for some of these methods is based on your Adventure Rank, can be doubled in Co-op Mode, and is only earned by the characters on the active party, excluding the Traveler or any characters already at Friendship Level 10. 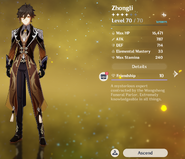