"Hunt a Cocogoat. Please and thank you."
Our community needs more information on this page! Can you help out? Click here to add more.
Notes on areas. Example: Cool Isle

An island cluster suspended in mid-air. A typical feature of many adepti realms.
A boundless world featuring nothing besides a cluster of islands.

The following released soundtracks are played in the Floating Abode realm. 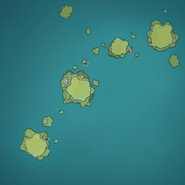