Game Systems
Exploration
Recently, the Teyvat ecology has seen an increase in fish population, with many new fish species appearing in various waters. The grassroots Fishing Association has its hands full and had to put up a commission for help at the Adventurers' Guild... Bring your fishing rod, choose the bait, find the spot, cast your rod, reel it in, and voila, a big catch!
The fish caught can not only be used to make dishes, but also can be exchanged for precious treasures at the Fishing Association. There's even a chance to catch vibrant ornamental fish to admire at your home!
What are you waiting for? Let's become anglers together!

Fishing is a Game System available after unlocking the Serenitea Pot and completing the quest "Exploding Population".

It involves crafting bait (Fruit Paste, Redrot, False Worm or Fake Fly baits) to catch different types of fish, with each type only being attracted to one specific bait.

When fishing, players need to cast their line into a body of water. The exact casting spot can be adjusted by the player, and should not be too close to the fish to not scare it away, but close enough to grab its attention. Once the fish bites, the player has to time their reaction and control the line's tension to reel in the fish.

The ripple effect indicating available fishing spots will disappear once all its available fish have been caught, and will return once at least one fish has respawned. New fish will respawn every 72 hours.

Even though adjusting ingame-time does not influence the respawn rate, it should be noted that each fishing spot has a different set of fish for night and day. This means that players can fish twice the amount if a fish can be caught during both day times.

Fish caught can be processed in Cooking to produce Fish as a cooking item, and can also be exchanged for rewards in Fishing Associations of various regions, where the player can notably exchange new fishing rods with different effects.

The Map includes a

Pin that can be used to mark Fishing Points.

Fishing Points are locations where fishing is possible. They are available in each region. The player will not be able to fish if they are currently in combat.

Ornamental fish can be found in fishing spots that emit a blue glow when seen from a distance and can be easily spotted among the cluster as its movements are erratic, jumping up and down in the fishing spot while the other fish calmly swim about. They are also much harder to catch. (Thoma's Talent Snap and Swing, which gives a chance to double catch in Inazuma, also affects Ornamental Fish.) After being caught, Ornamental Fish can be displayed in the furnishing Pool of Sapphire Grace, available from Jiawei from the Liyue Fishing Association.

Some information about how these fish spawn:

In short, any time a fish spawns, it can be Ornamental. 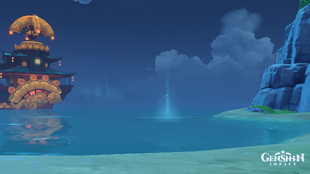 A blue glow that signals that an ornamental fish is present in the fishing pond.

Other fishing achievements include the following. 2 Achievements match the category selection:

When catching fish, Paimon may say one of the following voice-overs: