watch 03:41
Wiki Targeted (Games)
Do you like this video?
Play Sound

A replica of the famed sword of Arundolyn, the Lion of Light. Feel the power of a legendary hero as you hold this sword in your hand! Imagine yourself as the great warrior himself! Note: Daydreaming not recommended in live combat.

When the young Arundolyn swung his replica greatsword — modeled off the great Ravenwood, Knight of Boreas' own greatsword — imagining that he was cutting the old nobles of Mondstadt down, he never envisaged he would become the renowned "Lion of Light." Nor did he envisage that his young rival Rostam, who later died after serving the people of Mondstadt for 23 years, would one day become his most trusted right-hand man.
The replica of the Lion of Light's greatsword is now in the hands of another youngster.
How will this mysterious fate be passed on? 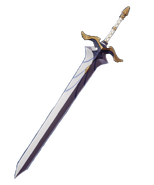 Retrieved from "https://genshin-impact.fandom.com/wiki/Ferrous_Shadow?oldid=175475"
Community content is available under CC-BY-SA unless otherwise noted.