Fate of a Fighter

Fate of a Fighter

A taciturn wounded soldier is hiding inside a damaged boat on Nazuchi Beach — just another one of the thousand other tragedies that plague Yashiori Island, where the war has reached a temporary standstill...

Inaba Kyuuzou needs some Naku Weeds to decrease the inflammation of his wounds. These herbs are commonplace in Inazuma's wilds.

Inaba Kyuuzou seems to have a matter to entrust to you...

It's time to inform Inaba Kyuuzou that the pirate camp he was worried about has been cleared out.

Go to the location designated by the final testament.

Complete In the Name of the Resistance

4 Hero's Wit
Inaba Kyuuzou, Paimon, Traveler
Fate of a Fighter is a World Quest on Inazuma. The starting point for this quest is west of the eastern Waypoint on Nazuchi Beach.

To unlock this quest, complete the Archon Quest, Act II Chapter II: Stillness, the Sublimation of Shadow. After clearing it, proceed to the shipwreck nearby.

The exclamation mark will not show in the map until the player approaches it and initiate the short cutscene.

Start the quest by approaching the shipwreck in Nazuchi Beach.

While the official quest ends here and Quest rewards are distributed at this point, a hidden section can be unlocked: after the quest is completed, four groups of ronin will appear around the beach, each one consisting of a single Kairagi: Dancing Thunder and three Nobushi: Kikouban, which can easily be identified from their lack of a dark aura, unlike other enemies in the area. Clearing all four groups out will result in additional tasks to appear. 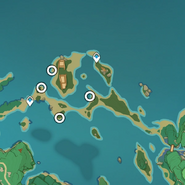 (After defeating all the enemies and talking to Inaba Kyuuzou)
Inaba Kyuuzou: Hmph, how humiliating...
Paimon: Hey! We saved your life! What do you mean, we're "humiliating"?

He's talking about himself, Paimon...

This is something unique to samurai...
Inaba Kyuuzou: To think that I had to be rescued by outlanders, and was even reduced to being judged by them...
Paimon: Oh... So, Mr. Samurai, are you alright?
Inaba Kyuuzou: ...

Well, he seems alright, at least.

So, who were those people?

Why were you attacked?
Inaba Kyuuzou: They're pirates. They have many strongholds around Nazuchi Beach.
Inaba Kyuuzou: Thugs, out-of-work miners and fishermen, fugitives running from the Vision Hunt Decree, deserters from both sides of the war... Sometimes, they gather into groups and degenerate into bandits and pirates. They try, in vain, to escape the control of Her Excellency.
Inaba Kyuuzou: Whether you call them Vagrants or Kairagi, they are all lawless thugs... We had been suppressing them for a while until the rebels destroyed the ward on the island...
Inaba Kyuuzou: The refugees from Tatarasuna and the mine fled in quick succession, and some of those rats scurried off to this place, swelling the ranks of these pirate gangs and making them more reckless.
Inaba Kyuuzou: That group of pirates just now came from the camp in the south, and they had their eyes on the cargo onboard.
Inaba Kyuuzou: Unfortunately for them, I ruined their plans... Hehe...

So this isn't your ship, then?
Inaba Kyuuzou: This thing? It belonged to the Sangonomiya rebels. I am not so sure myself... Either way, when I came, it was already deserted.
Inaba Kyuuzou: So I've stayed and lived in it like a hermit crab till now.
Inaba Kyuuzou: Hah, it's been a long time since I spoke so much. How exhausting...
Inaba Kyuuzou: If you do not mind, I need your help with something. Once my wound has healed, I will surely return the favor I owe...
Inaba Kyuuzou: I need you to help me clear out the pirate camp that I mentioned earlier.
Inaba Kyuuzou: That's the only way to stop them from coming back here and bothering me like a pack of stray dogs. It might even send the other pirate camps a message, so they don't get ideas.
Inaba Kyuuzou: It'll also let me see what you can do. How about it?

(After clearing out the pirate camp and talking to Inaba Kyuuzou)
Inaba Kyuuzou: You've returned.

You should have peace and quiet for a while.
Paimon: Huh, the atmosphere got weird all of a sudden...
Inaba Kyuuzou: I must apologize for asking you, an outsider, to do my dirty work.

You're being a lot more polite than when we first met.

You still owe us.

We're here to help.
Inaba Kyuuzou: Hmph... You two...
Inaba Kyuuzou: In that case, please find some Naku weed for me. It can be found everywhere on this island. Full leaves are the best, the liquid can be squeezed out and applied to the wound to reduce inflammation...
Inaba Kyuuzou: That's all. I'm going to take a nap now, so leave me alone.

(Gather 12 Naku Weeds and talk to Inaba Kyuuzou)
Inaba Kyuuzou: You're back. Stay safe while you're on this island.

Will these be enough?
(Give 12 Naku Weeds)
Inaba Kyuuzou: It will take a long time to mash the herbs into a paste. You can go now.
Inaba Kyuuzou: No, don't get me wrong. I'm not driving you away...
Inaba Kyuuzou: Come back after a while. It's good to have someone to chat with.

You look much better now.
Inaba Kyuuzou: All thanks to you. Once again, I am in your debt.
Inaba Kyuuzou: Haha, isn't it a pity that I've survived yet again?
Paimon: Isn't that a good thing? Why's that a pity?

What's next for you?

Have you ever thought about going back?
Inaba Kyuuzou: I haven't made my mind up about what to do next, but I don't think I'll go back.
Inaba Kyuuzou: Kujou Masahito is not a bad person, but his old man is calling for deserters to be caught and punished...
Inaba Kyuuzou: I cannot afford to get on the wrong side of him.
Inaba Kyuuzou: Maybe I'll take off my armor. It's been nice, living alone here...
Inaba Kyuuzou: But until we have peace, there's no point deceiving myself. My memories assert that I am still that same wounded, bloodstained soldier...
Inaba Kyuuzou: *sigh* And who knows what might happen in the future?

... ...
Inaba Kyuuzou: Well, as I was saying, I had never doubted the decisions of Her Excellency, so I think that even if I died, I would die with no regrets, right?
Paimon: Well, this conversation suddenly got heavy...
Inaba Kyuuzou: Ah, speaking of which, it's time for me to visit my old comrades in arms, who are still with me on this island.
Inaba Kyuuzou: In Inazuma's tradition, we offer our fallen comrades a Dendrobium, a delicate and noble flower... A symbol of the fate of all samurai.
Inaba Kyuuzou: By the way, if you meet my old comrades in arms in your journey, please stop for a moment and get to know them.
(Quest Fate of a Fighter completed)

(Speak to Inaba Kyuuzou again)
Inaba Kyuuzou: ...And it seems that the rats nearby have begun scurrying about again.
Inaba Kyuuzou: Watch out for pirates if you wander around these parts, outlander.

Thank you.
Inaba Kyuuzou: You're welcome.

You have a deal.
Inaba Kyuuzou: Yes, that we do.

Fate of a Fighter Guide