Eye of the Storm

Eye of the Storm

Multiple
Vacuum Field
The corporeal form of extremely high-quality Anemo energies. The formation of an Eye of the Storm indicates that the elemental ley lines of a region are blocked, which has led to siltation. Its reckless, heedless wielding of storms that all but sweeps people off their feet may be due to its nature as a symbol of the world stricken by malaise.
Archive

Eyes of the Storm are Elite Enemies that are part of the Elemental Lifeforms family.

For most of the attacks below, the core will be exposed for a few seconds after the Eye of the Storm uses their attack. Use this opportunity to deal damage to it.

In some instances, when its health falls below 20%, it will fall to the ground and cease all offensive retaliation against the player. This leaves it completely vulnerable to all attacks (bar Anemo elemental damage) until its defeat, and makes its effective health only 80% of what appears on the health bar.

Strangely, it can occasionally take extremely low (~0.02% of health) damage from an Anemo character. 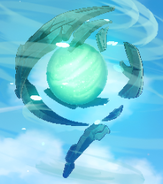 Eye of the Storm locations cannot be pinpointed on the map as it is not on the Adventurer Handbook.

2 Eye of the Storms can be found north of the Minlin Statue of The Seven on the northern edge of Mt. Aocang