A string of lovely jasper from the deep sea. It shines with a pure radiance like that of the moon, and just as ever-distant.

5
Coral Branch of a Distant Sea

5 Coral Branch of a Distant Sea

14
Jeweled Branch of a Distant Sea

14 Jeweled Branch of a Distant Sea

14
Jade Branch of a Distant Sea

14 Jade Branch of a Distant Sea

6
Golden Branch of a Distant Sea

6 Golden Branch of a Distant Sea

The "pearl and waves" emblem of the Sangonomiya is said to represent the waves that embrace Watatsumi,
And the bright pearls that can be found there. But some also say that it shows the jeweled wheel of Watatsumi Omikami keeping eternal vigil over the land of coral like the moon.

In the dreams of the deep sea where sponges and coral dwell, in the depths where flowing clouds and ocean sands dance as one,
Undying hope would pass from generation to generation of those descended from their god — they who dreamed the same dreams as Watatsumi.
The colors of the skies are ever-changing, and the lights and shadows cast deep beneath the waves are of forms ill-defined...
Thus did the brilliant compassion that the dark ocean could not conceal diffuse in tranquil bliss.

In those days, the first Divine Priestess once led her brethren with wisdom as precious as pearls,
And she selected clergy from amongst the people newly introduced to the sun, who aided the offspring of their god in comforting those for whom the light of day brought terror.
In latter days, the "Umigozen" who made the navies of Narukami tremble would sing whale-songs alongside them,
And it was this symbol that they drew as they danced with the airborne kurage.

Some years later, a single bolt of lightning would reject the dream of the Watatsumi people.
Into the storm slithered the serpent, the lightning's ruthless glow to surely face...
But the children of the god and the shrine maidens, who had hearts of pearl, would not forget.
Countless tales, gratitude unnumbered, and that ring of ocean gems would forever be passed down,
And they would shine ever brighter and more beautifully for it.

Whether it be the histories of the jeweled branches being torn or the birth of precious pearls,
Or the defeat of the wicked creatures in the depths to bring sunlight to the pale nation beneath the waves,
Or how the young man who dreamed of standing atop Mt. Yougou came to have the name of an "evil king," and had his great duel against the tengu...
All these would light up the hearts of the children of Watatsumi, like pearls from the heavens, like waves under the moon's glow.
They will carry the pain of loss away into the churning, salty waters, storing them within radiant pearls.
May the stories and sacrifices of the age of gods forever be handed down, along with this emblem of "pearl and waves."

Even if the storm clouds should gather, and even if the violet lightning's ferocity be perilous and unpredictable,
The silver moon of Watatsumi shall still pierce through the clouds and scatter forth its light. 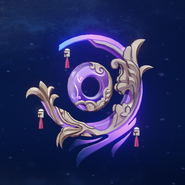 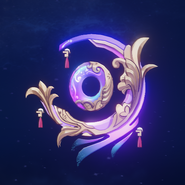