A naginata used to "cut grass." Any army that stands before this weapon will probably be likewise cut down...

5
Mask of the Wicked Lieutenant

5 Mask of the Wicked Lieutenant

14
Mask of the Tiger's Bite

14 Mask of the Tiger's Bite

14
Mask of the One-Horned

14 Mask of the One-Horned

6
Mask of the Kijin

6 Mask of the Kijin

The naginata was a lethal weapon by which scattered dross might be cut away.
And the one who wielded that naginata was one who guarded the path to eternity.

When the one who stood high above the storm clouds looked upon the mortal world, which she so loved,
Seeing their shallow disputes and transient obsessions...
Such contentions stemmed from needless attachments and unchecked desire — both enemies of eternity.
The wild weeds that disturbed the unchanging world would be swept away by the lightning.

"Well then — what sort of Eternity would ▉▉'s eyes reflect?" So asked the clergyperson who sloshed and drank wine with her under the sakura tree in that still-clear memory.

What a pointless question. Though the answer she gave them was lost to the alcohol,
She had gained the answer countless times in those memories. One must thin fruits to improve their quality, and plants used in dyes must have their flowers pruned.
Not a single speck of dross could be permitted in an eternal paradise.

"Ah, but even so..."
"Using that great blade of light to uproot all obsession and to eliminate the possibility for dreams to take root and wither by themselves..."
"A tranquil world that brooks no dispute, no gain, or no loss... It shall be an amnesiac world, lost to itself."
In the heart of eternity, those old friends still appear so clear and the scent of the sakura remains so fresh.

But I will never forget you, just as I will not forget the things that were lost across the years.
After all...

Having witnessed the pitch-dark annihilation consume those precious to her,
How could she not see the absurd nature of life and death, yes, incomprehensible destiny itself, as her mortal foe?
But since no one can overturn the impermanence of the world,
and the barren nature of this game,
Then let the eternal euthymia within her heart carry forth into the nation she loves. 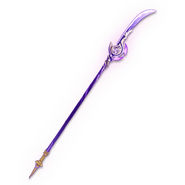 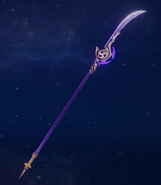 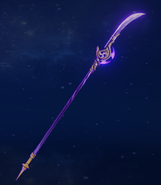 Engulfing Lightning was promoted or featured with a drop-rate boost in 2 Event Wishes: