Serenitea Pot
Emerald Peak is a realm layout in the Serenitea Pot system. It comes with Liyue Estate: Exquisite Mansion on Spring Peak.

A cloud-piercing mountain peak.
Well, that's how it looks, at least. But being inside a teapot and all, the highest mountain probably reaches no higher than the stalk of a tea leaf. 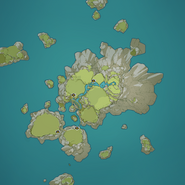