Combat
Game Systems
Elemental Nodes and Infusion Stones are objects that imbue nearby enemies with elemental buffs. They appear in certain Domains and some parts of the Teyvat overworld. They can appear in domains that do not have Ley Line Disorders like Floor 12 of the Version 1.5 Spiral Abyss, and they have somewhat different effects from Auras. Unlike Elemental Nodes, Infusion Stones can be broken.

Elemental Nodes usually start in a closed state, and when the challenge starts, they open up and pulse periodically, buffing enemies within range.

This page is in need of information.
Can you help out? Click here to add more.
test range

The range of these nodes is significantly larger than their pulse visuals would imply; further testing is needed to determine their exact range (possibly the entire area of the Domain fighting area).

Nodes pulse once every 15 seconds, buffing all enemies in range:[1]

Infusion Stones buff enemies the same way as the Elemental Nodes in Domains, but the infusion stones are vulnerable to damage and can be destroyed to immediately remove their Auras and buffs from enemies.

The Mutation Stones in the event Energy Amplifier Initiation also greatly buffed the enemies' offense, defense, and Interruption Resistance. Like other infusion stones, they could be broken.

Certain floors of the Spiral Abyss have elemental nodes: 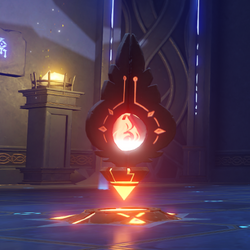 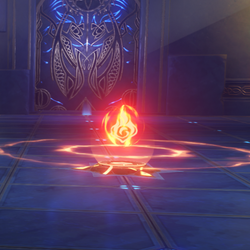