Inazuma
Electrograna are Grana in Inazuma that can be summoned by Thunder Sakura Boughs. They follow the player for a set period of time. They can be upgraded using the Sacred Sakura's Favor system.

Electrogranum can be used to traverse Thunder Spheres, travel through Thunder Barriers, or protect from the harmful effects of Balethunder.[1] They also negate most Electro DMG from natural sources.

Thunder Spheres allow for lightning-fast travel through the air. While carrying an Electrograna and in range of a Thunder Sphere a purple laser will point at the player. Upon selecting the traverse button the player will instantly blink past the Thunder Sphere and be propelled high up into the air.

Electrograna can be leveled up and gain new abilities via the Sacred Sakura's Favor.

When carrying an Electrogranum, you can gain its blessing for solong as it lasts:

When a character's Elemental Type is Electro and their Elemental Energy is less than or equal to 50%, Electrograna will slowly regenerate Energy for them. 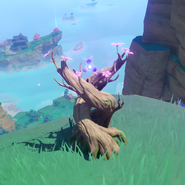 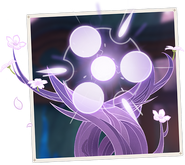 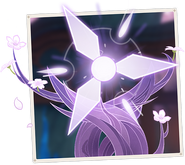 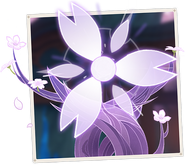