View source
watch 02:56
Raise a Floppa - The Loop
Do you like this video?
Play Sound
This article is about the event domain and event boss. For the furnishing, see Kageroumaru. For the regular event enemy, see Canine Bunshin.

Following Kageroumaru, you come across a dwelling.
Unexpectedly, Kageroumaru ran into the house, catching everyone unawares and leaving the trail cold.
You'll have to follow him in if you wish to continue this investigation...

30
This small house, while ostensibly run-down, conceals a whole other realm on the inside.

The Dilapidated Old House is an event Domain encountered during the Bantan Sango Case Files: The Warrior Dog event.

It is marked under the

Upon receiving a certain amount of poise damage, Kageroumaru will be temporarily stunned, which may be used to the player's advantage. 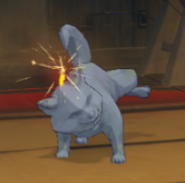