"Delve into destiny!"
This page is about upcoming content, which may be subject to change.
The information here is not representative of content currently available in game.
Datamines from beta game versions and leaked information are not allowed on the wiki. Prohibited content will be deleted and may result in a block. Please read the Community Rules before editing.

사이노 Saino
Cyno is an upcoming playable character in Genshin Impact. He was first seen on Chapter 12 of the official manga and has appeared in the Teyvat Chapter Storyline Preview. In the series, he is seen to assist Collei in sealing her Archon residue.

Cyno is a knowledgeable scholar from Sumeru Academia who seems to be a rather aloof and mysterious person, preferring to keep things clear and concise. He appears composed and confident because of his straight forward and stoic behavior.

In the Official Genshin Webtoon, in Cyno's first appearance, he comes off as cold when he first meets Amber and threatens to turn her into a pig until we learn that he is willing to help Collei with sealing her archon residue.

Cyno's clothes appear to be inspired by traditional outfits that were worn during the Ancient Egyptian civilization. His headpiece resembles the head of Anubis, a jackal-headed deity, also known as the God of the mummification. The kilt-like garment Cyno wears is reminiscent of the Shendyt, which was a popular men's clothing, usually depicted on Ancient Egyptian commoners, rulers and even deities. In the manga, Cyno is depicted wearing a large, black cape including a hood with what looks like jackal ears sewn on it, matching the aforementioned headpiece. His cape seems to be of inspiration from Northern Africa, showing some similarities with the large capes worn in the Sahara in order to avoid the heat, and to stay protected during sand storms.

It is unknown as to whether the red ornament on his belt is a Pyro Vision or a simple decoration. 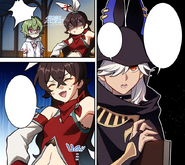 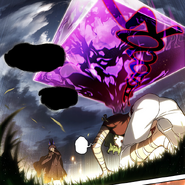