Materials
A crystal that contains a sliver of Tatarigami power. Adding this material during smelting will greatly increase the strength and toughness of metals.

Found on Orobashi's bones on Yashiori Island and Tatarasuna
A crystal that contains a sliver of Tatarigami power. Adding this material during smelting will greatly increase the strength and toughness of metals.
In Inazuma, "Tatarigami" refers to the corpse of a divine being and the strange phenomena it creates. They say that before the god that created Crystal Marrow became the Tatarigami, it had many names, one of which was "Orobashi no Mikoto." Orobashi no Mikoto's body was as long as the winding seashore, and its voice was so resounding that only the Dark Sea could absorb it. Yet in the end, it too was cut down together with Yashiori Island itself.

Crystal Marrow is a Local Specialty of Inazuma found on Yashiori Island and Tatarasuna.

Crystal Marrow is found on Orobashi's bones on Yashiori Island; a few can also be found on Tatarasuna, at sea level west of Mikage Furnace. Unlike other ores, Crystal Marrow does not need to be broken to be collected and can be harvested directly.

No recipes use this item.

2 Characters use Crystal Marrow for ascension:

No Weapons use Crystal Marrow for ascension. 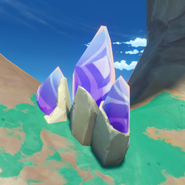