Materials
An uncut crystal. Only professional craftsmanship can bring out its true value.

Found in the wild

Investigation
An uncut crystal. Only professional craftsmanship can bring out its true value. This kind of limpid rock is a precious gift of the land, which can be utilized as a valuable weapon-making material.

Crystal Chunks are turquoise crystals used in Forging and Alchemy. They are used primarily for forging Mystic Enhancement Ore and certain Weapons.

Crystal Ore are generally found inside caves or mines and near mountainous terrain.

They can be harvested by attacking their destructible nodes, dropping 1–3 Crystal Chunks. Crystal Ore can be broken more quickly, like all Geo Constructs, by using Blunt Attacks and Geo abilities. Their respawn rate is 72 hours. However, certain locations with Mining Outcrops will spawn additional Crystal Ores alongside Magical Crystal Ore. To note, Mining Outcrops respawn daily, and respawn independently from the regular Crystal Ore.

In Co-Op Mode, each nearby player will get their own drops with amounts randomized separately and players will not be able to see others' drops. Unlike most Materials, they cannot be affected by Anemo abilities that may move them.

They can also be awarded upon completion of some Expeditions.

There are 20 items that can be crafted using Crystal Chunk: 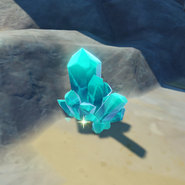 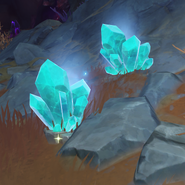 In The Chasm: Underground Mines