View source
watch 04:03
Wiki Targeted (Games)
Do you like this video?
Play Sound

"How about we explore the area ahead of us later?"
This page contains unmarked story spoilers. Read this at your own risk.

클립스 Keullipseu
Crepus Ragnvindr, known as Master Crepus to some, is the deceased biological father of Diluc and adoptive father of Kaeya.[1] Prior to his death, he was the head of the Dawn Winery. He and Diluc are descendants of the Dawn Knight Ragnvindr.

His untimely death, which occurred around three years prior to the game's events, caused the falling out between Diluc and the Knights of Favonius. The infamous Fatui are connected to the cause of his death.

He made his first appearance in Chapter 7: Dusty Chest in the official Manga.

I wanted to become a Knight too, when I was your age. However, I wasn't fit for the job. The gods also had other plans for me...

When Crepus was young, he dreamed of joining the Knights of Favonius but did not qualify to become a member. Despite not being able to achieve this dream, as his son Diluc believed, he contributed to Mondstadt as much as the Knights have but in his own way. Crepus wished that his son would become the most esteemed knight. This pushed Diluc to train rigorously and then passed the Knights of Favonius' trials. He would soon rise to the position of Cavalry Captain, becoming the youngest with that title in the Knights' history.[2]

Crepus was a talented winemaker and greatly respected by those in his employ, such as Connor and Elzer who mourned his death while still in the prime of life.[3] Connor also regarded him as a father figure and went on to manage the winery whenever Diluc was away.

As a father, Crepus loved his sons greatly. When Kaeya was abandoned at the winery around a decade ago, Crepus took him in and treated him as his son; because of this, Kaeya felt torn between Mondstadt and his homeland Khaenri'ah.[4]

At Angel's Share, Crepus holds a celebration with patrons for his son's coming of age. He and Diluc leave the tavern after the party to return home before rain would come. On the road, a horrific monster, Ursa the Drake, attacks the transport fleet they were traveling with. Many lay dead on the ground and as the monster is about to attack again, Crepus uses his Delusion to protect his son and defeat Ursa. The power he wielded was so great that Crepus was mortally wounded. Shortly after, he succumbs to the effects of the Delusion and fades away in Diluc's arms.[Note 1] The Knights of Favonius led by Kaeya witness this, having arrived too late to help them.

Diluc returns to the Knights' headquarters with a heavy heart. There, he receives an order from Inspector Eroch: "Conceal the truth." Eroch insists that in order to maintain the reputation of the Knights of Favonius, the incident must be covered up as an unfortunate accident. He explains that the people of Mondstadt will not trust the Knights to protect them anymore if they were to know a "mere businessman" was the one who settled the incident. Enraged, Diluc resigns on the spot and takes off his Vision. Amber, hiding in the room, hears everything.

Diluc later departs from Mondstadt, embarking on a journey across Teyvat to uncover the origins of the mysterious power that killed his father. 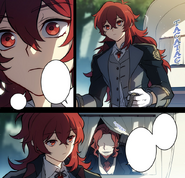 Chapter VII: Part II
Crepus tells Diluc about how he wanted to join the Knights