Serenitea Pot
Cool Isle is a realm layout in the Serenitea Pot system. It comes with Mondstadt Mansion: Windward Manor on Pearl Isle.

An island cluster surrounded by water.
One wonders how many cups of tea can be brewed from this vast ocean.

The following released soundtracks are played in the Cool Isle realm. 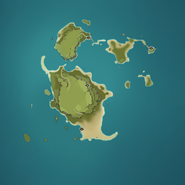