The towering but broken spire tells of its tragic story silently. Its chambers and halls are filled with memories and longing, as well as howling winds.

Now that the Stormterror crisis has passed, it's clear skies above Mondstadt once again.
However, the memory of facing Dvalin in the sky amidst the storms is ever so vivid.
Relive your memories and once again partake in the battle. Maybe you'll learn something new.

Confront Stormterror is a Trounce Domain battle unlocked after completing Archon Quests Prologue, Act III Quest Calm Before the Storm. Players can relive the fight they had with Dvalin in A Long Shot and receive bountiful rewards.

One of The Four Winds of Mondstadt: Dvalin, the Dragon of the East.
With the passages of long years and amid boudless darkness, even the purest gem will become dulled by dust, and even the noble dragon might be corrupted and cankered by hatred.
But never forget that dust can be wiped away, and the power of doubt and poison can be shattered.

"Fly freely in the sky.
"Just like you did in those days when we met, when I walked upon this land and sang the songs of the wind,
"And you soared on high, looking down on the world from above.
"Today, the sky is no longer swept by wind and snow. The green grass grows all over the earth, and it is beautiful.
"If you could walk on the earth and listen to the songs of shepherds and the scattered sound of the wind chimes in the distance, if you could have tasted wine as sweet as honey, you could understand.
"How wonderful it would have been if you were as I, witnessing your noble, beautiful form as you soared through the blue sky.
"Then you would know that this sky and this earth are both things worth fighting for."
Archive

In addition there is a chance to receive

Dream Solvent as well as

Northlander Billets.
The player must reach a certain Adventure Rank (AR) to enter the higher levels of the domain.

Erstwhile King of the Skies

There are 5 distinguishable phases, each phase has different combat environment due to Caelestinum Finale Termini and Energy Lightning. Time limit is the duration given to break Dvalin's shield before the game automatically transition into the next phase. The phase also increase when Dvalin's shield is broken for a total number of times. Dvalin performs the next transition attack when either the time limit or shield limit is reached.[1] In Phase 3, Energy Lightning will not be triggered if the player breaks a total of 6 shield within 2 minutes.

Dvalin does not appear when the fight starts; rather, players must get closer to the center of the arena in order to trigger his appearance. He has two bars; his normal health bar, and a white bar below it which signifies the strength of his hide.

Dvalin prioritizes Fly-by, which can deal massive damage but is easily avoidable with a well-timed dash or simply moving to the far edges of each platform, as it only hits the center.

After this attack, Dvalin will fly back to the center and either perform Dragon Breath or Bite, the former taking far greater priority. If Bite is used, then Dragon Breath will be performed as the next attack. Dvalin leaves himself open for both attacks, so it is important hit him shave off his hide. While any attack can damage his hide, some types of attack deal more than others, such as Claymores.

During his Dragon Breath attack, Dvalin will grasp the platform the player is on with his talons while facing the player's current position. After a few seconds, he will charge a powerful breath attack and slowly sweep his way to the other side. This attack deals massive damage, but because he is open even longer compared to Bite, it is recommended to start from the side opposite of his head.

After the white bar is fully depleted, Dvalin will collapse onto the platform. The player must then climb up and attack the Tainted Blood clot, which depletes Dvalin's health. The player has about 15–20 seconds to deal as much damage as possible before Dvalin regains his senses. Dvalin will then perform Pulse Bomb, launching two orbs at the player's location.

Each Pulse Bomb attack will either cause Dvalin to either advance to the next "phase" or reset his attack rotation, depending on the conditions met. When Caelestinum Finale Termini is performed, it will cause a cutscene, which also stops the player from performing any action for its duration. After the cutscene ends, the platform to the left and right of the one the player is on will become cracked. This deals Anemo DoT that intensifies the longer they remain on it, so it is important to move to a safe platform as quickly as possible. Anemograna are present on the edges of each platform to create an updraft for the player to move around. It is important not to fall out-of-bounds, as it will deplete 10% of the team's health and drain them of energy, while putting them back onto the last platform they were on, and causes Dvalin to immediately regain consciousness if he had been knocked out.

After three Caelestinum Finale Termini attacks, all platforms will be cracked; however, the boss should be defeated well before that happens.

The following Story Domains take place in the Confront Stormterror: 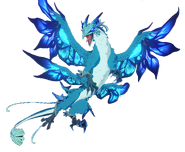