View source
watch 02:59
Metroid Dread - The Loop
Do you like this video?
Play Sound
This article is about the city. For the nation, see Mondstadt.

The wind will carry dandelion seeds, songs, and stories far afield, and it also guides gentle Travelers to its realm. Welcome to Mondstadt.

The City of Wind

Mondstadt is the main city of the namesake nation. Located in the west part of Starfell Valley, Mondstadt features cobblestone streets and several windmills surrounded by a large stone castle wall on the east lower end. A statue of the Anemo Archon watches over the city, with the Favonius Cathedral in the back. 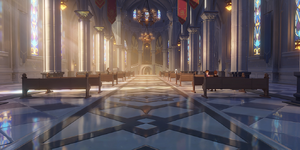 A holy place managed by the devoted adherents of the Anemo Archon. It was once a palatial estate from which the aristocracy flaunted their authority.

Once a place for the nobles to look down on the poor and weak, the Favonius Cathedral is now a place where the poor and weak can be taken care of and assisted. Even scholars and enthusiasts come from all over the world to see it. 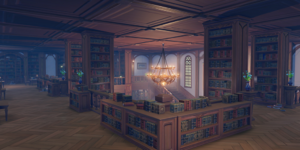 The library with the most books in all the northen lands. Other than those collected in the restricted section, all the books here are open for public reading.

Within the Knights of Favonius Headquarters is the Library. It is open to the public, although there's a restricted section not accessible if not given permission by the librarian. 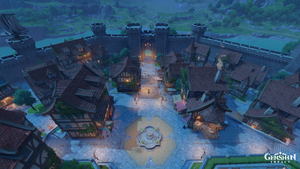 On the southern end of the city (a bit beyond Schulz's Blacksmith), there is a door with a Hydro seal over it. Speaking to Goth reveals that it is one of his properties, but because someone placed the seal over it, he cannot lease it until someone breaks the seal. While the seal is up, interacting with the door leads to the following dialogue:

Examine the door: (This door seems to be locked by a curious seal. What is this place, really?)

During Mona's first Story Quest, "Beyond This World's Stars," she breaks the seal on the house and rents it. You are able to interact with Mona through the door, but after the quest ends and you leave the area, the house is no longer interactable. 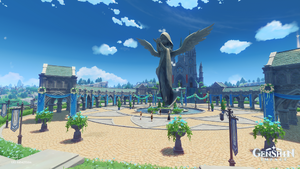 The Anemo Archon Statue Plaza is located in front of the Favonius Cathedral. It features a giant statue of Barbatos that is climbable, and people can sit on the hands. Several events occurred here, including the offering of the Windblume flower and parts of Venti's story quest.

The player can initiate a minigame that involves running through hoops around the plaza perimeter. Running through all the hoops will grant a Chest.

Angel's Share is the most famous tavern in Mondstadt. It is owned by Diluc, but is usually just staffed with Charles and Patton.

Note: "Friends came for a drink. Temporarily closed. —Manager"
Paimon: Do people in Mondstadt really love drinking that much?

The following soundtracks are played in the City of Mondstadt.

Windblume decorations at the plaza with the large statue of Barbatos