Childish Jiang (Chinese: 小姜 Xiǎojiāng) is an NPC found in the Sea of Clouds region, northwest of Liyue Harbor, Liyue. He starts the world quest A Little Game, where he plays a game of hide-and-seek with the player. 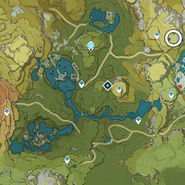 Childish Jiang's location (after A Little Game is completed)

Jiang'er is the son of Shaoyuan and Duan'ya. While loved by his parents, Jiang appears to suffer from a mental illness that causes him to think and act like a child, which earned him the name Childish Jiang. His father served with the Millelith and inquired with Bubu Pharmacy to discern what was afflicting Jiang'er.

His father was eventually called upon to serve what he hoped was his final mission, but died in the process. He had expressed an intention to take him and his mother away to another place to live in should his resignation be declined. His mother, who learned of her husband's death, chose not to reveal what happened to Jiang'er, instead opting for a game of hide-and-seek. Jiang'er's mother soon left and died sometime later, not wishing to traumatize her son. When he heard extra voices on the mountain, he believed she had brought help and hid even more. Jiang'er never hid too far from the home and would occasionally return to eat, but he never saw his mother ever again.

Jiang'er would survive his childhood thanks to assistance from Uncle Tian (who calls himself a "distant" relative) and his father's fellow Millelith, with both the Tianshu and the soldiers themselves coming to visit Jiang'er from time to time to check in on his well-being. Jiang'er himself is unaware of his parents' deaths, even after the Millelith had placed gravestones on the property.

Jiang'er seems to have a mental disability that leaves his mind similar to that of a young child's, which likely resulted in the name "Childish Jiang".

He loves playing hide-and-seek, considering himself to be a great player. Despite this, he takes pity in his games as he is willing to give hints to the seeker as to where he is hiding if they cannot find him.

Because of his mental disability, Jiang'er has trouble understanding more complex situations. He himself is unaware of his parents' deaths, because his mother had not told him of his father's death, and to spare him from any grief, chose to play game of hide-and-seek with him and never returned out of fear he would know the truth. Due to this disability, he himself is unaware of his mother's death, instead believing that his parents would eventually come home one day and finish the game. He loves his parents, and likewise, his parents unconditionally loved him, back when they were still alive.

Jiang'er himself is also illiterate, as he is unable to understand the texts engraved in his parents' gravestones. Likewise, he also believes that they were brought in per his parents' request.

Childish Jiang: When will Mommy and Daddy get back...

Is this your home?

Childish Jiang: Yep! I live here with Mommy and Daddy. But actually, I don't know where they are right now.
Childish Jiang: But that means that I have to stay nearby. I mean, what if they came back and couldn't find me? They'd be so worried...

What are those two stone tablets...

Childish Jiang: Mm, see you. Do come back to play with me again if you have the time!

(The writing on this tombstone is dense, recording the dates of birth and death of the deceased as well as some details about their life. It's in excellent condition, and there's the smell of wine in the area — someone must have cleaned this tombstone recently and also made an offering of wine.)

(The writing on this tombstone is dense, recording the dates of birth and death of the deceased as well as some details about their life. It's in excellent condition, and there seems to be some flower petals scattered around — someone must have come to pay their respects here recently.)