Teyvat
Chests in Genshin Impact are objects that can be found around the world of Teyvat and as rewards for completing certain domains.

Opening chests usually rewards the player with Primogems, Adventure EXP, Sigils, Mora, and a random assortment of Weapons, Artifacts, and Character EXP Materials. There are also Achievements that are granted upon opening a certain number of chests within a region.

Treasure Compass gadgets can be used to search for chests within their respective regions, with some exceptions. (For example, Anemo Treasure Compasses cannot be used within the Dragonspine region.) The blueprints for these gadgets are obtained as a reward for reaching Reputation level 6 in Mondstadt and Liyue and level 9 in Inazuma.

There are five types of chests: Common, Exquisite, Precious, Luxurious and Remarkable.

They can reward various items, including

Additionally, some chests are hidden and have to be dug up from the ground. These are marked with either a shovel or some other sign. Treasure Hoarders are also an indicator of a hidden chest. When walking near their location, the option to "Dig" will appear, and then the chest will appear.

These chests appear exclusively in events, and may have their own pool of rewards.

All 1★, 2★, and 3★ rarities of Character EXP Materials and Weapon Enhancement Materials, as well as 2★ and 3★ Talent Level-Up Materials, can be obtained from chests.

The following artifact sets can drop from chests. They will typically be 1★ or 2★ rarity, but may also drop 3★ rarity artifacts at chests of Exquisite rarity or higher.

The following notable chests have at least one fixed reward.

While many chests are exposed, and can be located through the usage of a Treasure Compass, certain chests will be hidden from the player and must be revealed through various methods.

Within the game's achievements, some of them contain information on the amount of chests opened by region. The highest known numbers for those achievements are: 523 in Mondstadt, 1134 in Liyue, 234 in Dragonspine, 731 in Inazuma, 185 in Enkanomiya and 248 in The Chasm/The Chasm: Underground Mines. The chests counted on the counters are only those found in the open world in Teyvat. Chests that can be found in temporary quest locations, such as the Cathedral in Venti's New Plan, or in Domains are not counted for the chest opening Achievements.

Over the course of updates, many bugs were found and fixed regarding chest counters:

Today the counters have their respective values ​​for each region:[2]

It is important to remember that:

Some chests are available for a certain time limit within the game. After this time, they could no longer be collected. These chests counted towards HoYoLAB records in its Summary section.

Investigation points can be found throughout villages, Treasure Hoarder encampments, and in other places throughout the world attached to objects such as barrels or abandoned carts.

They drop low value items, including a small amount of Mora

While not technically chests, these investigation points do trigger the healing effect of the Adventurer Artifact Set, and therefore bear mention here. 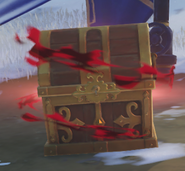 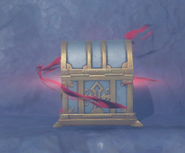 A hidden chest just barely visible under the ground.

The same chest, just dug up.

Common chest, knocked over in the Minacious Isle