Genshin Impact Wiki
Register
Don't have an account?
Sign In
Advertisement
in: Characters, NPCs, NPCs with rewards,
and 8 more
English

Following a certain dialogue branch for the first time will give you four Black-Back Perch Stews. 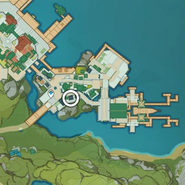 Mao loves cooking and is confident in his skills, claiming that anyone who eats at his restaurant will become an instant regular. Compared to many other chefs in Liyue, Mao does not have a discerning eye towards the Li or Yue cooking styles, stating that food exists to feed the hungry.

He is supportive of his daughter, having initially trained her in the culinary arts himself so that he could pass the restaurant down to her in the future. Upon realizing her talent, rather than keeping her pinned down at the restaurant, he allowed her to travel across Teyvat so she could find inspiration and perfect her art.

Chef Mao: Here for the Wanmin Restaurant experience? Hi, I'm Chef Mao. Everyone in Chihu Rock will have heard of me.

Can I get food to-go?

Chef Mao: Sure! What do you feel like having?
(Opens the Wanmin Restaurant menu)

Tell me more about the Wanmin Restaurant.

Chef Mao: Well, I'm the chef. I may not be quite the culinary legend that my daughter is, but you can be sure the Wanmin Restaurant is a cut above all those time-honored brands you see around!

Chef Mao: That's right — Xiangling! My dear daughter, and my best apprentice ever.
Chef Mao: I only taught Xiangling how to cook so that she could inherit the Wanmin Restaurant from me one day. I had no idea she'd turn out to be such a pro. Her abilities far exceed my own.
Chef Mao: But she's more than just an excellent chef. She has a real gift for innovation, she's constantly creating all these wonderful new dishes. That really sets her apart from what the time-honored brands do. And it makes her dishes all the more special for people who are used to traditional cuisine.
Chef Mao: I started to worry that the restaurant might be too constricting for her. So I sent her off for a while to do some exploring and perfect her art.
Chef Mao: If anyone is going to revolutionize Liyue cuisine in the future, it'll be her. No doubt about it!

Chef Mao: Oh, come on. How could business here at Wanmin Restaurant's be slow?
Chef Mao: One taste of our handiwork will turn most people into regulars.
Chef Mao: ...Speaking of regulars, we've had a young lady with a strange headdress come in pretty often lately. The vegetarian dishes on our menu seem quite to her taste.
Chef Mao: But I've noticed that she only ever orders the vegetarian dishes, and in very small amounts, too.
Chef Mao: I gave her a larger portion out of sympathy, but she seemed quite reluctant to accept it. Is she trying to maintain her physique? Young ladies nowadays really are serious about such things...

Which type of cuisine do you do?

Chef Mao: Type of cuisine? Oh, we don't bother ourselves with that kind of thing here.
Chef Mao: Li style and Yue style are all Zhongyuan Chop Suey to us.
Chef Mao: We just concern ourselves with making the most delicious food imaginable using everyday ingredients, universally loved flavors, and truly excellent cooking.
Chef Mao: Food exists to feed the hungry. It's that simple. These people who go putting systems and frameworks around everything are just amateurs that are overcompensating... They don't understand what cooking is really all about.

Chef Mao: Black-Back Perch Stew is our signature dish. Sure, you might find it in other restaurants too, but I guarantee you it won't taste anywhere near as good as ours.
Chef Mao: A generous helping of fish, cooked with a special blend of chili oil made from Jueyun Chili and Violetgrass. Beautifully tender, bursting with flavor. I've never had a single complaint from anyone who's eaten it!
Chef Mao: ...It's a little spicy for some people, though, so not all would eat it in the first place.
Chef Mao: Why not have a taste? If you like it, you can always buy some more.
(Obtain Black-Back Perch Stew ×4)

(After completing Part II: Three to Get Ready, and Here We Go)
Chef Mao: Here for the Wanmin Restaurant experience? Hi, I'm Chef Mao. Everyone in Chihu Rock will have heard of me.
Chef Mao: My name might not be the most famous around, but my daughter Xiangling is the champion of this year's Masterful Chefs. Now hers is a name I'm sure everyone's heard of!
Chef Mao: Haha! That's my dear girl alright, our very own culinary genius. Her future is very bright indeed!