Bo Peng (彭博)[1]
Charles is an NPC located inside Angel's Share, serving as the bartender. 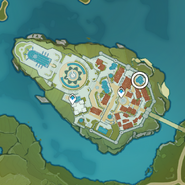 Charles is the bartender at Angel's Share who has been employed there by the Dawn Winery for more than a decade. While he works most nights, sometimes the owner, Diluc, will tend the bar and give him a night off.

During the quest Equivalent Exchange, you must retrieve the Strange Cocktail Ingredient for Charles and he makes you the Special Beverage from Angel's Share.

He has light brown hair, both a mustache and a beard, he has amber eyes, a necklace with a golden amulet, also a brown belt with pockets. Charles also wears brown gloves.

Charles: What'll it be today?

Charles: Here's the menu. Let me know once you're ready to order.
(Opens Angel's Share menu)

(After completing The Outlander Who Caught the Wind)
Charles: It's been quite the headache for sure. Stormterror's affected our tavern's supply routes, so the variety of wines here has also dropped...
Charles: As for Stormterror itself, I'm not too worried. I think those people who numb themselves with alcohol are just scared out of their wits.
Charles: But we do reach the point of no return, then we just need to wait for night to fall.
Charles: The "Knight Who Emerges At Night" will not just stand idly by..

(After completing A Long Shot)
Charles: Well, what's passed has passed, I say.
Charles: Life isn't all sweet fruit juice. It also needs some bitter alcohol. These incidents will also become part of our experience.
Charles: Rather than ask how this could happen, we should look forward to the future. Accepting the bitter with the sweet is how adults do things.
Charles: Once you're ready for the bitter, I'll pour you a special brew.

Charles: The apple cider from the Dawn Winery is a special at Angel's Share.
Charles: You can try my special cocktail if you want. The cocktail is on the house if it's your first time here.

What sort of liquor is the best?

Charles: If you like strong wine, then I'd recommend that you try Death After Noon. It's Captain Kaeya's favorite.
Charles: But the strongest wine I know has to be the one called Fire-Water.
Charles: It hails from Snezhnaya, and was brought into Mondstadt by Snezhnayan merchants, but Master Diluc stopped importing it, saying that it didn't fit the tastes of the people here.
Charles: The only remaining bottle is from the original batch. It's for display purposes only, though, so you'll have to go to Snezhnaya if you want to try some.

Tell me about yourself.

Charles: You want to know about me?
Charles: I've been working as a bartender here for more than a decade. I'm employed by the Dawn Winery, like everyone else.
Charles: I'm not that interested in alcohol, but it's my job so...
Charles: I mean, I'm not like Diona at Cat's Tail. I heard she hates alcohol.
Charles: Occasionally, Master Diluc, the owner of the winery, will cover my shift.
Charles: Days off are precious after all, so I'm very thankful to him for that.

Not right now, thanks.

Charles: Really? Shouldn't drink too much anyway I guess.