A keenly honed weapon forged from some strange crystal. Its faint blue light seems to whisper of countless matters now past.

Calamity Queller is a 5-Star Polearm.

They say that this long polearm was forged using materials that are not from this world.
The weapon has passed through the hands of many loyal yet unfortunate souls.
It has seen many a slaughter begin and end, and tasted many a foul beast's flesh and blood.

It is said that a person whose job was to exorcise evil once came to the great chasm of crystal sands.
There, they retrieved an ominous, aqua-colored crystal from its depths.
Then, they hired someone to forge it into a weapon, naming it "Calamity Queller."

"If disaster should befall, this shall surely be used to calm it."
The tribespeople who made their living in the craggy mountains were not partial to either boasts or critique.
But since there was no contract signed, and such words were of no cost, they accepted them all the same.

Later, the time came when the monstrous tides scaled the bedrock, turning the cinnabar-colored earth black.
The shield-wall of the Millelith and the dark forces clashed, and any stragglers were all slain.
Like a cold star amidst the gloom, Calamity Queller flashed this way and that at the heart of the maelstrom...

When, at last, the light of the setting sun split the mournful clouds, the dark sludge sunk back into the depths of the chasm.
The Calamity Queller was also lost, together with the Yaksha who wielded it — both returned to silence.
In times thereafter, those who wielded this spear would largely meet similar fates.
But there were people who would fight without requiring orders or protect people without taking any oaths.
For them, such a fate was hardly one to be lamented...

It is also said that this spear was once borrowed from someone.
And in a deserted, water-eroded cave, it would bear witness to a clash between intimate friends. 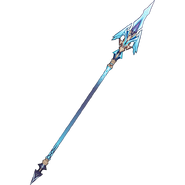 Calamity Queller was promoted or featured with a drop-rate boost in 1 Event Wish: