Bubbles deal Hydro DMG on impact and will trap the player inside, causing the same immobilizing effect as Mona's Stellaris Phantasm. These bubbles can also trap small enemies as well as apply the Wet status to any enemies on contact.

If the player gets trapped in a bubble, a red button will appear on the right half of the screen. Players can repeatedly click this button (mobile devices), the X button (PlayStation) or the space bar (PC) to break free from it. 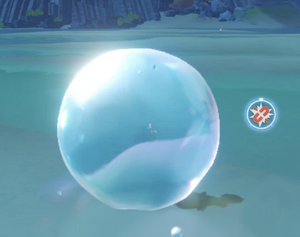 Once trapped, the player will be unable to use elemental ability buttons or switch to other characters. This is indicated by the grayed out icons on the screen.

A certain retaliation for this attack is very simple, the homing bubble itself is very fragile when in contact on anything with a hitbox aside from the player. Using AoE or ranged attacks can help pop it from a distance, or the player can lure the bubble towards another target (enemy or object).

Other possible methods to avoid bubbles include: