Genshin Impact Wiki
Register
Don't have an account?
Sign In
Advertisement
in: Removed, Past Events, Events,
and 7 more
English

< Battle Pass
View source
watch 02:53
GTA: The Criminal Enterprises - The Loop
Do you like this video?
Play Sound

This content is no longer available.
This page contains information about a past event that may or may not return in a future version.

Oceansong is the twelfth Battle Pass.

Sojourner's Battle Pass is the free Battle Pass for all players. Gnostic Hymn can be purchased for $10 USD and will unlock a second tier for this BP Period. Any player that purchases Gnostic Hymn will also get an extra reward at BP Lv. 30 where they can choose one of the 4★ weapons from the current BP Bounty.

After unlocking Gnostic Hymn and reaching BP Level 30, you can select a weapon of your choice from the BP Bounty

Costing around $20 USD (or $11.99 if you already purchased Gnostic Hymn), Gnostic Chorus offers the following:

The rewards listed for Gnostic Hymn include rewards from Sojourner's Battle Pass, and Gnostic Chorus includes all rewards from lower BP reward levels.

There are a total of 40 days in this Battle Pass period, starting on April 28, 2021. Players who unlock Battle Pass after the period started will have less days to rack up BP EXP.

There is a weekly Battle Pass EXP cap of 10,000 EXP for Daily Missions and Weekly Missions, but the ones under "This BP Period" do not count towards the cap.

Daily Missions reset at 4:00 AM according to your server's time zone.

Weekly Missions reset on Monday at 4:00 AM, according your server's time zone.

There are 2 permanent BP Period missions to complete for 3,750 EXP. These missions can only be completed once during the Battle Pass Period.

Events may also add limited-time BP EXP, but will no longer be available once the event ends.

BP EXP from events, and from permanent BP Period missions, do not count toward the 10,000 weekly limit. 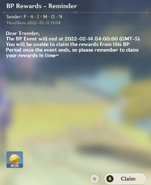