Each of the 50 levels in the Battle Pass requires 1,000 EXP. Upon reaching each level, players will unlock rewards depending on their Battle Pass type (basic Battle Pass or Gnostic Hymn).

Primogem ×150 can be used to purchase a level. The game automatically sets the amount to what is needed to reach the next level ending in 0 or 5, but the amount can be increased or decreased as desired.

Purchasing the Gnostic Hymn or Gnostic Chorus packages allows you to claim rewards from all previously unlocked levels in the current BP Period. These packages must be re-purchased every BP Period.

Purchasing Gnostic Hymn awards the following items (after reaching the appropriate level in the Battle Pass):

4 Guidance of the Land of Thunder

3 Guidance of the Land of Geo

1 Philosophies of the Land of Thunder

1 Philosophies of the Land of Geo

The items that are not Primogems, Intertwined Fates, or the BP weapon from the BP Bundle are valued at a total of about 1,840 or 2,320 Original Resin as follows:

When the 50:60 Primogem to Original Resin ratio from the first Original Resin refill per day is considered in addition to the 680 Primogems and the 4 Intertwined Fates, the items received from purchasing Gnostic Hymn have a value of about 2,853 or 3,270 Primogems, which is almost as much as the 50 USD bundle of 3,880 Genesis Crystals or, alternatively, is 35%-40% of the 100 USD bundle of 8,080 Genesis Crystals. This does not include the BP weapon from the BP bundle, which does not have any set or estimatable value in Primogems. 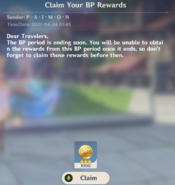