View source
watch 02:59
Wiki Targeted (Games)
Do you like this video?
Play Sound
This article is about NPC. For the disguised Bake-Danuki, see Atsuko (Bake-Danuki).

아츠코 Acheuko
Atsuko (Japanese: Atsuko) is an NPC in Liyue Harbor. Following the strict rules passed by the Inazuma Shogunate and Kanjou Commission, she fled Inazuma and now lives in Liyue Harbor. She can be found walking by the docks.

Following a certain dialogue branch gives you one Guide to Freedom. 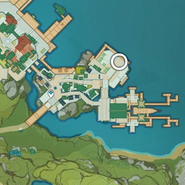 Atsuko is from Inazuma and is the daughter of Yoh and Michiru. From an early age, Atsuko strove to be independent, having learned to cook by the time she was seven or eight years old, and being able to sail out to sea by the time she was a teenager. She helped out at her family's store, and claims to be skilled at delivering goods. After escaping from Inazuma, she planned to find work at the wharf as a sailor and thus travel the world, but has no idea where to even begin looking for that job.

Due to the events related to Rex Lapis, the whole city is shocked, so she thinks that there isn't any place that would be willing to give a job to an outlander. She made advanced preparations for finding work opportunities by asking around, and in response was referred to approach Manager Kuan, Clerk Zhao, and Nervous An. She postponed talking to them due to her unfamiliarity with how locals interact.

(Prior to completing Home Lies Over The Ocean)
Atsuko: Hello, hello. Oh, ah, I mean, good fortune! I'm still not accustomed to using the local greetings.

Atsuko: Haha, I'm so sorry, my name is Atsuko, it's lovely to meet you.
Atsuko: I've never seen this many outlanders before back in Inazuma.

Inazuma?
Atsuko: Yes, my home, back on the other side of the ocean.
Atsuko: Though I don't wish to speak ill of my homeland, the pressure back home is just too much.
Atsuko: If you want to leave, you have to go through several stages of application and approval with the Kanjobugyo. Most people never get the chance to see the outside world.
Atsuko: Perhaps the Shogunate really knows best in having such strict control, but the allure of the open sea and the freedom it represents grew inside me until I couldn't take it anymore.
Atsuko: So... One day when I was gazing out to see, something in me just snapped. I just took the nearest vessel I could find and set out to sea.
Atsuko: So if you see anyone wearing clothes similar to mine, they're probably from Inazuma. Please, if you see such a person, you cannot breathe a word of this to them, they cannot know I'm here. Please, I beg of you.

Atsuko: What's wrong with it? You mean, breaking Inazuman regulations?
Atsuko: I think it depends on the person. Some people are quite content to spend their whole lives within the fences of their farm...
Atsuko: But not me! If there's anything that can fence me in, it's somewhere beyond these lands, beyond the seas, beyond the stars!
Atsuko: If you can't understand the value of freedom, let me be the one to explain it to you!
(Obtain Guide to Freedom ×1)

Hi there! You don't seem to be from around here either.

Atsuko: That's right, I'm from Inazuma. It's been a long road getting here.
Atsuko: Facing the crashing waves before me, whilst trying to escape the forces behind me... My raft sank, my money got swept away by the sea...
Atsuko: Was a good thing the locals helped me, otherwise I wouldn't be standing here today. I've decided I want to get a job on a boat and travel all around the world.

About the letter to your family...

Atsuko: Ah, you've delivered it to my parents, have you? Thank you very much. It's a relief to know that they're doing well.
Atsuko: My mother would most likely keep worrying, while my father would try to comfort her while keeping his own worries in his heart...
Atsuko: *sigh* It was only after leaving that I realized how much they must miss. I'm... really sorry for making them worry.

Atsuko: Sometimes I miss the sights that I used to see in my home... The tranquil Chinju Forest, the lovely Sacred Sakura... I grew up with them.
Atsuko: But after the Sakoku Decree was implemented, Inazuma really became such an oppressive place. For someone who loves freedom like me, it was simply unbearable.
Atsuko: If we wanted to leave, we'd have to go through several stages of application and approval with the Kanjou Commission. Most people would never get the chance to see the outside world.
Atsuko: Perhaps the Shogunate really knows best in having such strict control, but the allure of the open sea and the freedom it represents grew inside me until I couldn't take it anymore.
Atsuko: That's why I eventually just grabbed the nearest vessel I could find and set out to sea.
Atsuko: The journey was tough, but thanks to the intervention of some locals from Liyue, I now have my freedom!