Artifacts are equipment items that increase characters' stats. There are five artifact slots, and equipping a certain number of artifacts within a set can activate special artifact set bonuses. Different characters cannot equip the same artifact at the same time, but they can be unequipped or swapped between them.

All artifacts have a main stat, officially denoted as Main Affix, along with up to 4 secondary stats called substats, officially denoted as Minor Affixes, which together can greatly increase your characters' strength in combat. Certain artifact pieces, such as the Flower of Life and Plume of Death, have a fixed main stat, while the other pieces can roll for more than one type of main stat (see: Types, Stats).

Players can hold a maximum of 1,000 Artifacts in their Inventory at a time. After reaching the limit, attempting to pick up more Artifacts will result in an "Item amount exceeds max limit" pop-up.

The player can store Artifacts by having them on the Inventory or by equipping them on characters. Each character has exactly 5 slots in which they can equip artifacts. When equipped, the artifacts are in effect and cannot be disabled or switched during combat. Each of these five slots represents one of the five Artifact Pieces and you cannot place an artifact of a certain type (e.g. a Flower Artifact item) into a slot of a different type (e.g. a Plume-designated slot).

The Flower of Life (or simply "the Flower") occupies the first slot and increases a character's HP attribute by adding flat +HP as its main stat. It is one of the two artifact pieces to have a fixed main stat (flat +HP).

Along with the Plume of Death, the Flower of Life is considered to be one of the easiest pieces to get specific desirable substats on, because the variance in rolls is restricted to the substats.

Note that an artifact cannot roll its main stat as a sub-stat, so Flowers of Life cannot have the flat +HP sub-stat. It is possible, however, to have +HP% in a Flower since it is considered a different type of sub-stat.

The Plume of Death (simply "the Plume" or, more commonly, "the feather") occupies the second slot and increases a character's ATK attribute by adding flat +ATK as its main stat. It is one of the two artifact pieces to have a fixed main stat (flat +ATK).

Along with the Flower of Life, the Plume of Death is considered one of the easiest pieces to get specific, desirable substats on, because the variance in rolls is restricted to the substats.

Note that Artifacts cannot share the same main stat as a substat, so Plumes of Death cannot have the flat +ATK substat. It is possible, however, to have +ATK% on a Feather, since percentage and flat are considered different types of substats.

The Sands of Eon (also known colloquially as "the clock", "the timepiece", "the hourglass", "the watch" or simply "the sands") occupies the third slot and is one of the three Artifact Pieces that does not have a fixed main stat, making them a more "flexible" piece in theory, as they can increase a character's power in different areas (e.g. survivability, damage, utility, etc). Although it does not have a fixed main stat, the Sands of Eon piece does have a fixed pool of possible main stats, totaling 5: the basic four (HP%, DEF%, ATK%, +EM) along with the specific Energy Recharge, which can only be found as a main stat on this piece, although it is found as a substat elsewhere.

It is piece considered to be of medium difficulty to get specific, desired stats on: harder than the Flower of Life and Plume of Death (which both have fixed main stats), but easier than the Goblet of Eonothem and Circlet of Logos, because of their larger pools.

According to some community-made experiments posted on Reddit, it appears drop rates for the main stats are fixed but are not officially known. Tests show your timepiece has a 28% chance of rolling for HP% or DEF% as a main stat each, while Elemental Mastery and Energy Recharge have a roughly 10% chance each. 25% chance for ATK%[1][2].

The Goblet of Eonothem (also "the goblet" or "the chalice", but more generally called "the cup") occupies the fourth slot and is one of the three Artifact Pieces that does not have a fixed main stat, making them a more "flexible" piece in theory, as they can increase a character's power in specific areas (e.g. survivability, damage, utility, etc). Although it does not have a fixed main stat, the Goblet of Eonothem piece does have a fixed pool of possible main stats, totaling 11: the basic four (HP%, DEF%, ATK%, +EM) along with the special Physical/Pyro/Hydro/Cryo/Electro/Geo/Anemo DMG Bonus%. Note that this is the ONLY place where you can find elemental/physical bonus damage% in an artifact as it also does not appear as a substat in any artifact piece, making elemental/physical DMG bonus% Goblets specially crucial and precious. As of patch 1.4, Dendro is not available as a main stat.

It is considered the hardest artifact piece to get specific, desired stats on for two important reasons: (1) the sheer number of different main stats it can roll (11 in total, 12 if you count Dendro) and (2) the low drop-rates for the considerably more desirable and rare main stats, all while still aiming for desirable substats. According to community-gathered data, these essential Physical/Elemental DMG bonus cups have roughly only a 4-5% chance to roll for each element, making them statistically hard to get. The highest probabilities of main stat are DEF% (21%), ATK% (21%) and HP% (19%) while Elemental Mastery only has a 2-4% chance[2][1].

It is advisable, therefore, that players pay specific attention to their goblets as to not fodder them accidently. Because of this also, players might choose to use cups of completely different sets (see: Artifact Sets) than the ones they are using on their other slots, prioritizing their other four slots for set bonuses and leaving the cup slot open.

The Circlet of Logos (also known colloquially as "the crown", "the mask", "the headpiece", "the headgear", "the helmet", "the hat" or simply "the Circlet") occupies the fifth and final slot and is one of the three Artifact Pieces that does not have a fixed main stat, making them a more "flexible" piece in theory, as they can increase a character's power in different areas (e.g. survivability, damage, utility, etc). Although it does not have a fixed main stat, the Circlet of Logos piece does have a fixed pool of possible main stats, totaling 7: the basic four (HP%, DEF%, ATK%, +EM) along with CRIT Rate%, CRIT DMG% and Healing Bonus% as their exclusives. While CRIT Rate% and CRIT DMG% can be found as substats on all pieces, the Circlet's main stat is the only place in an artifact where Healing Bonus% can be found.

It is considered the second-hardest artifact piece to get specific, desired stats on because of its sizeable pool of 7 possible main stats: a Reddit analysis post by u/fririe[2] shows the highest probability of main stats are DEF% (24%), HP% (22%) and ATK% (22%), while the lowest is Elemental Mastery (5%) and Healing Bonus% (7%). CRIT Rate% and CRIT DMG% both appear to have a 10% chance to drop each[2][1].

Along with the main stat, artifacts can have up to 4 sub-stats; the starting number is based on its rarity.

An artifact cannot have duplicate sub-stats, and its sub-stats cannot be the same as the main stat. (E.g., an artifact with an ATK% main stat cannot gain an ATK% sub-stat, but could have a flat ATK sub-stat.)

The initial value of each sub-stat is also randomized according to rarity.

Every 4 enhancement levels, an artifact sub-stat gets added or increased:

Equipping 2 or 4 different artifacts that belong to the same set gives a special bonus depending on the set. Since characters can only equip 5 artifacts, a character can only have either one set's 2- and 4-Piece bonuses, or two 2-Piece bonuses from two different sets.

Enhancing artifacts requires other artifacts to be used as fodder. Upon enhancing an artifact, there is a small chance that the artifact will receive ×2~5 the normal amount of EXP. While leveling artifacts, 1 point of EXP costs 1 Mora (except when recycling an already-leveled artifact: see below.)

A consumed artifact's EXP value is based on its rarity:

When consuming an enhanced artifact, in addition to the Base EXP granted, 80% of the EXP used for its upgrades will be recovered at no extra Mora. For example, using a

4/5★ artifacts cannot be destroyed at all. 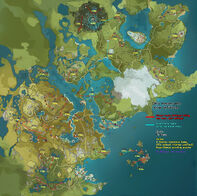 Retrieved from "https://genshin-impact.fandom.com/wiki/Artifacts?oldid=156160"
Community content is available under CC-BY-SA unless otherwise noted.