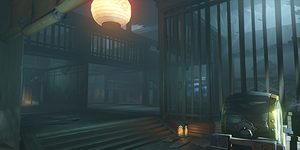 Empty Boat of a Thousand Gates

There will be four nearby Electro Monuments.

Once all four are activated, a chest and Thunder Sakura Bough will spawn at the bottom of a nearby well. Use the bough to summon an Electrograna, which can be used to teleport to move to a Thunder Sphere and pass through a nearby Thunder Barrier containing a Ruin Guard, chest, and Electroculus.

There is also 1 part of the Torn Page: Toki Alley Tales (Prologue) on a column near the Thunder Barrier.

Along the west coast of Araumi there will be a cave with some Bake-Danuki and wooden crates. Inside the cave there is also an Earth Kitsune Statue. Using the Memento Lens on it gives the following dialogue:

Someone's Voice: "Ah, it would be wonderful if we could build a port here, and thus centralize trade with other nations in the hands of our government..."
Someone's Voice: "O Almighty Shogun, please indulge the unworthy fancy of a mere Commissioner..."

Much of Araumi is actually underwater; once you open it, there is a path to the Perpetual Mechanical Array and the Empty Boat of a Thousand Gates domain.

Unlock the gate to the underground requires using the Memento Lens (obtained from the quest Sacrificial Offering) on 3 Earth Kitsune Statues located next to a Thunder Sakura Bough in a well below an Electroculus. This will reveal 3 mechanisms. After activating them, a door will open to the underground.

There is a Cube Device puzzle consisting of 5 cubes — 4 making a square and 1 in the center. Make the 4 outer cubes all align in the same direction as the center cube. Solving the puzzle will lower the water level nearby, so one can descend further below.

Swim through the shallow water to reach some stairs and a mechanism to unlock a gated door to the outside. Nearby there is an Old Stone Slate (#3) in a mound.

There is also another Cube Device puzzle involving 5 cubes in a line. Make them all face in the same direction. Solving this cube puzzle will further lower the water level, leading to the next underground level.

The first Cube Device requires making four cubes in a square face the same direction as the center cube. This will lower the water level in the hole near the chest.

The second Cube Device requires making five cubes in a row face in the same direction. This will further lower the water level, giving access to the passageway to the Perpetual Mechanical Array.

On this floor there are 3 rooms. One has a Thunder Sakura Bough. Another has a Thunder Barrier that requires a higher level of Electrogranum to unlock. And the third has 2 Ruin Guards guarding a chest.

Near the first room there is an Electro Rock Pile with some Seagrass behind it.

Beyond the third room, there are some stairs leading even further down to a door. Start the mechanism to open the door to descend to level 3.

There will be some Ruin Sentinels along the way (Ruin Scout and Ruin Defender). The passageway will lead to a huge space with a Teleport Waypoint and some ship wreckage with another Old Stone Slate (#4) nearby.

There is a Kairagi: Dancing Thunder guarding a chest. The Kairagi goes by the name Acting Instructor Mifune Satoshi (Iwakura Art Okuden). It will have some dialogue too:

Continuing further leads to a large room with the Perpetual Mechanical Array boss below. On the floor above the boss, there will be a Thunder Sakura Bough and some Thunder Spheres. Using the thunder spheres to cross over to the other side.

To unlock the domain Empty Boat of a Thousand Gates:

Light-Up Tile Puzzle: the panels turn blue when stepped on

Light-Up Tile Puzzle completed: when all panels are activated, they will glow gold, and the mechanism will open